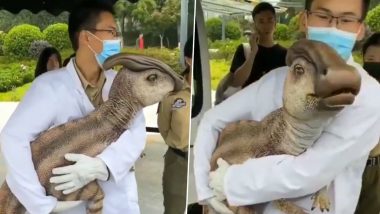 Are you anticipating an alien invasion or dinosaurs coming back to life in the remaining months of 2020? The year which seems like an apocalyptic phase right from the start has seen so many of disasters together. While we continue the battle against a pandemic, a video of a very real-looking baby dinosaur is going viral on Twitter. A baby dinosaur is seen in arms of a man and it looks too real. Some of them have believed it to be a baby dinosaur clone that was made by China. As the video gets more interpretations on social media, we tell you the truth behind it. Firstly, it is not a real animal, but a specimen from Jurassic World's Exhibition. Secondly, it is not a clone of a baby dinosaur made by China. Cute Baby Dinosaur Playing in Puddles is the Best Use of 3D Animation You'll See (Watch Viral Video).

It is very easy to pass on piece of fake news to create a panic among people online these days. People barely do their own research and pass on what they feel is real. So a video which was shared by official handle of Jurassic fandom page a couple of days ago, is giving some the creeps that dinosaurs are coming back in 2020 or we are bracing for them in 2021. Some have claimed that China has made these clones. The video is of a young Parasaurolophus, a creation made for the Jurassic World exhibition. T-Rex Skeleton Named Stan Likely to Fetch Record Price of Around $8 Million at Auction in New York.

Looks like we're setting up for a fun 2021. pic.twitter.com/IDFgyGP3RC

A dinosaur? They made is in a lab for sure? https://t.co/HzX7UrUXVE

Fuck china, what the hell is these things now ?? 😳😳 these mfs wants to give an end to this world 💀💀 https://t.co/iwXXUCN5a6

Dinosaurs Back to Life

Here's The Video by Jurassic World:

Check out this young Parasaurolophus new to Jurassic World the Exhibition! pic.twitter.com/BtSO7Hld9L

Although it looks convincingly real, it is more likely a puppet and the man is using his right hand to operate it. It is an animatronic puppet, which is a kind of technology used in theme parks. It is almost like a robot but in here it looks very realistic to a dinosaur. It is how the movies are made too. So don't worry, dinosaurs haven't come back to life or are not being cloned anywhere.

(The above story first appeared on LatestLY on Sep 27, 2020 06:05 PM IST. For more news and updates on politics, world, sports, entertainment and lifestyle, log on to our website latestly.com).