Fact Check: Call For 'Removal of Punjabis From Indian Army' at Cabinet Committee on Security Meet? Video Clip With Doctored Audio Being Circulated on Twitter; Know The Truth

It is beyond doubt that no suggestion was made to remove Punjabis from the armed forces. Further, it is also clear that the footage used to make the wrongful claim is from the Cabinet Committee meeting held after the demise of General Bipin Rawat, India's first CDS who died in a helicopter crash on December 8, 2021. 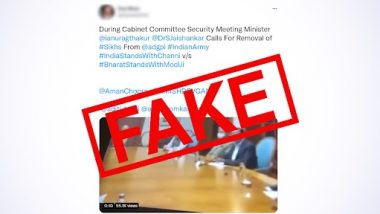 New Delhi, January 7:  A tweet has gone viral claiming that a call for the removal of Punjabis from the Indian Army was made at a recent Cabinet Committee on Security meet. The tweet is being circulated with video and audio to support the misleading claim. However, on a closer look, it was clear that the video and the audio didn't match and that it was an attempt to create or spread misinformation using the video clip by adding the wrong audio to it.

The video which was tweeted by a user named Dua Khan with the username @diyaaaakhan put up the video clip which features Home Minister Amit Shah, NSA Ajit Doval and MEA S Jaishankar among others. The video comes with the caption that, "During Cabinet Committee Security Meeting Minister @ianuragthakur @DrSJaishankar Calls For Removal of #Sikhs From @adgpi #IndianArmy (sic)." However, upon examining it is clear that the video and audio do not match. In fact, the video clip used is of the CCS meeting on General Bipin Rawat's chopper crash, which was held on December 8.

Meanwhile, it has been found that the audio which was used with the video was in fact from a Twitter 'space' session.

Therefore, it is beyond doubt that no suggestion was made to remove Punjabis from the armed forces. Further, it is also clear that the footage used to incite passions by making wrongful claims is from the CCS meet on General Bipin Rawat's chopper crash and has nothing to do with the claim being made on Twitter. Hence, the claim being made on Twitter is completely fake.

The claim and the video are both without any substance and is false as well as misleading.

(The above story first appeared on LatestLY on Jan 07, 2022 06:34 PM IST. For more news and updates on politics, world, sports, entertainment and lifestyle, log on to our website latestly.com).