A viral photo of Shah Rukh Khan has been making rounds online that sees him in new dashing salt and pepper look. However, the picture is fake and not to be trusted at all. Check out the fact check here. 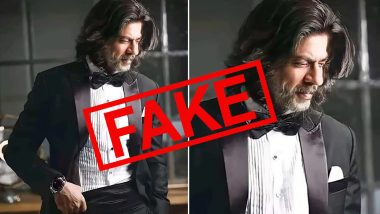 Social media is an awesome place... but is it reliable? Talking on the same lines, we often do not check if a piece of information getting viral on the internet is true or not. We've often seen many celebrities been dragged into unnecessary chaos and well today was no different. As, this time it's Bollywood superstar Shah Rukh Khan who is being praised, but it's not what it looks. FYI, a photo of the actor has gone viral online that sees SRK flaunting new look and hairdo. Fact Check: This Is Not Shah Rukh Khan-Gauri Khan’s Son Aryan Khan Urinating In Public At An Airport.

The picture in question is all over social media where fans are going gaga over Shah Rukh in long hair and white-black bearded look. One user who goes by name Rupika Singh while sharing the snap has penned, "Handsomest!" However, not all you see is real, all the time. Fact Check: Shah Rukh Khan Has a Kashmiri Doppelganger? Here's The Truth Behind the Viral Photo of The Young 'SRK Lookalike'.

uh r the most beautiful pattern of handsome thing i have ever laid eyes on 😘💜..#ShahRukhKhan

Well, we at LatestLY went to the crux of the story and found out the authenticity of the viral photo which happens to be quite opposite of what claimed.

While the picture is real, it isn't the latest one. As the photo is from Bollywood photographer Dabboo Ratnani's shoot from 2017. So, in a nutshell, someone has tweaked the original image by adding long hairdo and salt-n-pepper beard on SRK. Ghosh.

Lastly, the viral image that sees Shah Rukh Khan in a tuxedo flashing his new salt and pepper look is morphed, and not to be trusted at all.

Meanwhile, on the work front, SRK will be soon seen in Pathan, which stars Deepika Padukone and John Abraham and also has a cameo of Salman Khan. Further, he also has Atlee's yet-to-be-titled film. Stay tuned!

The viral picture is not to be trusted as its MORPHED

(The above story first appeared on LatestLY on Feb 20, 2022 02:49 PM IST. For more news and updates on politics, world, sports, entertainment and lifestyle, log on to our website latestly.com).