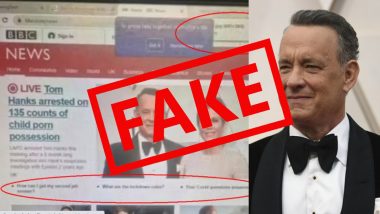 Earlier in 2020, somewhat similar FAKE news had circulated for Hanks wherein it claimed that he was arrested in Australia for pedophilia. It also had mentioned that the news of the actor being COVID- 19 positive was an attempt to hide his time in custody. Well, now coming back to BBC News' viral headline, we would say, do not fall for it. Fact Check: Rishi Kapoor Listening to a ‘Doctor’ Singing Deewana Track Is Spread on Social Media as Actor’s Last Video From the Hospital – Here’s the Truth Behind the Viral Video!

Well, we checked BBC News' website for the Tom Hanks story, but nothing as such was found. We even used "Tom Hanks was arrested" and other keywords related to it on the site and yet were left with no answer. Further, we also noticed no major portals in the US have covered this BIG news. And so, the BBC News' headline going viral is technically a morphed image that is being surfaced online in the name of the portal.

Well, what we feel is that the aim of the scammer was to malign the image of Tom Hanks and so it made up fake news and circulated online. This kind of activity should be stopped and strict action should be taken against such peeps who run this fake news business. In a nutshell, the news with regards to Hanks is fake. Stay tuned!

(The above story first appeared on LatestLY on Jun 25, 2021 01:19 PM IST. For more news and updates on politics, world, sports, entertainment and lifestyle, log on to our website latestly.com).