Fact Check: Rishi Kapoor Listening to a ‘Doctor’ Singing Deewana Track Is Spread on Social Media as Actor’s Last Video From the Hospital – Here’s the Truth Behind the Viral Video!

A video of a hospitalised Rishi Kapoor listening to fan singing a song is going viral as the late actor's last video. Here's the fact check. Check it out! 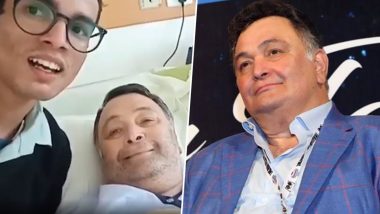 While the nation was still mourning about the sudden death of Irrfan Khan, another sad news of Rishi Kapoor no more hit the headlines on April 30, 2020. The veteran actor who had an illustrious career breathed his last at the age of 67. He was admitted to South Mumbai’s HN Reliance hospital on April 29 and passed away a day after. As per the statement released by the deceased’s family, Rishiji died due to leukemia. Since two years the Bobby actor was battling cancer and finally said goodbye to the world. Having said that, after his demise, a video has been going viral on the web which supposedly claims to be the last moments of Rishi Kapoor from the hospital. Rishi Kapoor Demise: Late Actor's Daughter Riddhima Kapoor Sahni Shares a Tear-Jerking Post For Her Papa (View Pic).

The social media claim about the video is that it was one of the late actor's last moments, listening to a hospital staff singing "Tere Dard Se Dil" from the 1992 film, Deewana. Further, the claim also says that the staff is a doctor. Rishi Kapoor is later seen complimenting the 'doctor' for singing the track so beautifully. Riddhima Kapoor Sahni Posts Dad Rishi Kapoor's Smiling Photo in His Memory, Says ‘Legends Live Forever’.

Check Out The Video of Rishi Kapoor Below:

Keeping the actor's tragic demise in mind, the video is definitely emotional, but the claim isn't entirely true. However, we at LatestLY went to the crux of the story and found out the authenticity of the video which happens to be quite opposite then what claimed.

While the whole setting in the video is real, it isn't taken on April 29, 2020, which was when Rishi Kapoor was admitted to the Reliance Foundation Hosiptal after complaining of breathlessness. The same video has been uploaded on YouTube by one DK Sanu, who is the singer in the video on February 28, 2020. While we are not sure if it has been taken during the time Rishi Kapoor was admitted in a Delhi hospital earlier this year, the upload date is enough to negate the false claim.

So while the video is real, the claim isn't true and there is no such video of the actor that has been leaked from the Reliance Foundation Hospital from Mumbai.

The viral video is Rishi Kapoor's last moments from the hospital

The viral video is old and is from February 2020

(The above story first appeared on LatestLY on Apr 30, 2020 04:09 PM IST. For more news and updates on politics, world, sports, entertainment and lifestyle, log on to our website latestly.com).