Kamala Harris Served Tacos With Her Picture to Journalists On Board Air Force Two? Fake Post Goes Viral; Here's The Truth Behind The Image

A viral fake photo of Vice President Kamala Harris Serving Tacos on Air Force Two has been making rounds on social media that claim that the tacos bore her likeness. Check out the fact check here. 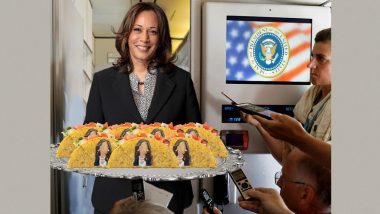 The adage pre-photoshop and/or green screen days said, 'I'll believe it when I see it," but in this day and age where tech advancements run amock, don't believe everything you see folks. At least until the veracity of the story has been verified by reputable news agencies. Take, for instance,  a June 25, 2021, post on Instagram featuring an image that showed Vice President Kamal Harris on Air Force Two with a platter of tacos with her face on their shells in frosting, as the platter was extended toward a group of a journalist. The caption on the post read,  "Kamala serves tacos w/her face on them to commemorate her first visit to the border." However, the post was a complete fabrication created at the heels of the criticism that Harris received for handing out cookies bearing her likeness to the reporter on June 8.

Earlier in the month, Fox News reported a story of Ms Harris handing out cookies with an image of her official White House portrait to reporters while travelling on a plane to meet with the president of Guatemala. The reports garnered much censure from the masses who perceived it as a self-involved move.  She derived criticism from politicians and people across social media. However, it was later revealed  that the cookies were provided by Cake-Wich Craft, a Black-owned bakery in Washington, D.C., that supports students through its scholarship program "Cupcake Dreams." Similarly, there are no reports of Ms Harris ever having served tacos on a plane as the Instagram post claimed.

Well, we scoured the Internet trying to find a substantial basis for the genesis of this report but couldn't find any verified reports that would support these claims. Typing in the key works "Kamala Harris serving tacos on the plane" led us to a story about the madam Vice President visiting a Vegan Taco shop in Las Vegas, Nevada, in March. But the Tacos did not in any shape or form bear her likeness. This leads us to conclude that the image-making rounds in the Instagram post are digitally manipulated. 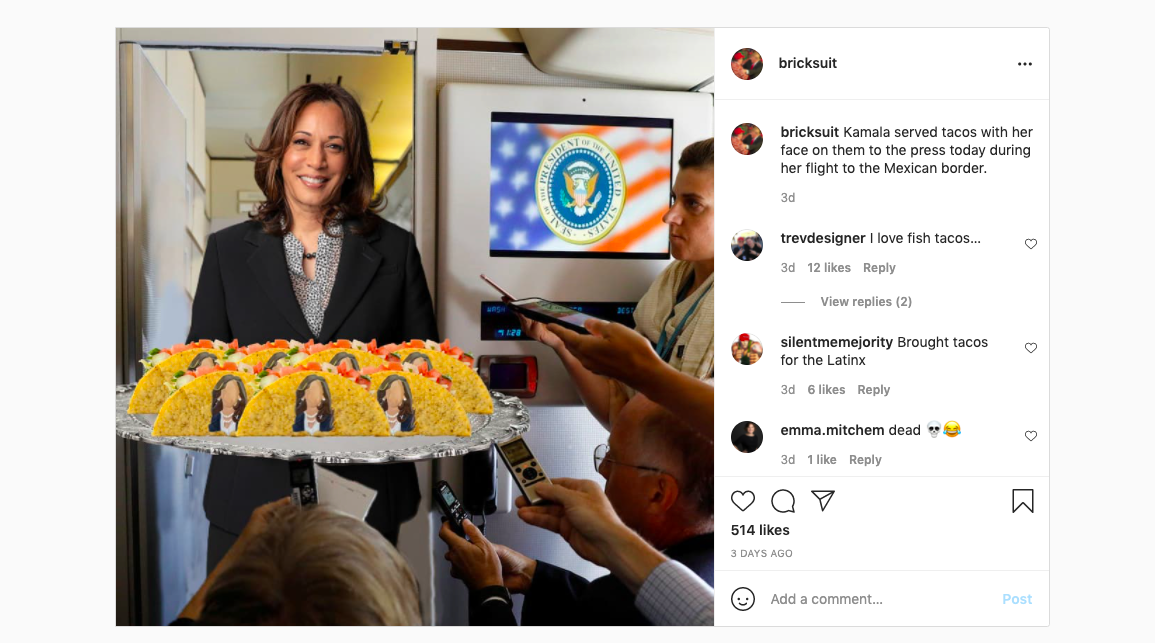 It appears that fresh off her last criticism for distributing cookies with her image, Harris was ripe for a new one and made a pretty easy target for social media users to cash in on the clout. However, the post is completely false.

Kamala Harris served tacos with her face on them to the press today during her flight to the Mexican border.

(The above story first appeared on LatestLY on Jun 29, 2021 12:19 PM IST. For more news and updates on politics, world, sports, entertainment and lifestyle, log on to our website latestly.com).