A bizarre news report about a woman claiming that she has successfully impregnated herself with endangered gorilla semen, is going viral on various social media platform. Fact Check shows that it is a fake news and was reported by a satirical website, that clearly states that its content is frictional in nature. 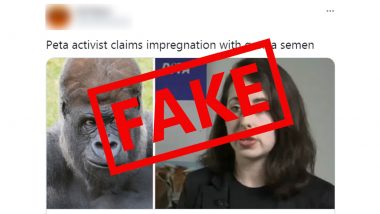 New Delhi, June 7: A bizarre news report about a woman claiming that she has successfully impregnated herself with endangered gorilla semen, is going viral on various social media platform. In the report, a 23-year-old PETA activist and former biologist at San Diego Zoo said that she used the in-vitro fertilisation (IVF) to combine gorilla semen with gorilla eggs, create an embryo, and successfully impregnated herself. The news has taken the social media by storm and people are curious to know more about the incident. Gigantic Moon Seen Crossing The Sun in North Pole in Arctic Region Between Canada And Russia For 30 Seconds? The Viral Video is Fake.

However, it needs to be noted that the story about the women impregnating herself with gorilla semen is a fake news. Fact Check shows that it was reported by a website called 'World News Daily Report,' which clearly says 'Where Facts Don't Matter.' It is a satirical website and all its content is frictional in nature. The website also states, ' All characters appearing in the articles in this website – even those based on real people – are entirely fictional and any resemblance between them and any person, living, dead or undead, is purely a miracle.'  Is This the First Image of Chinese Rocket? Viral Tweet Claiming ‘First Photo’ of Long March 5B Is Fake, Know the Truth Here.

Actually it is true and has been covered by many internationally.https://t.co/4gcsH3hjel

Though the news report raised various eyebrows and people across the globe became highly interested to know the full story, it is fake. The article is talks about frictional characters and has nothing to do with the reality. The website reporting the incident clearly claims that its article are satirical in nature. People are advised to check and verify such information, as well as the nature of content creator before believing it to be true.

Woman impregnated herself with gorilla semen.

(The above story first appeared on LatestLY on Jun 07, 2021 10:05 AM IST. For more news and updates on politics, world, sports, entertainment and lifestyle, log on to our website latestly.com).