Is This the First Image of Chinese Rocket? Viral Tweet Claiming ‘First Photo’ of Long March 5B Is Fake, Know the Truth Here

A pic has gone viral on social media with a Twitter user claiming it to be the first image of the Chinese rocket, Long March 5B debris. But it’s not and the claim is fake. We will know the truth here. 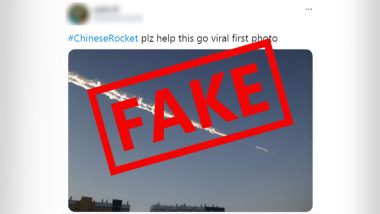 The Long March 5B rocket which successfully launched the Tianhe module last month, unfortunately, dropped into low Earth orbit. It was set to make an uncontrolled re-entry. After much speculations and constant tracking, China’s space agency confirmed that the rocket re-entered Earth’s atmosphere, landed to the west of the Maldives in the Indian Ocean. But before the rocket debris’ re-enter, social media was filled with a lot of buzz. From sharing funny memes to videos and photos claiming to have spotted Long March 5B in the sky went viral. On a similar note a pic has gone viral on social media with a Twitter user claiming it to be the first image of the Chinese rocket. But it’s not and the claim is fake. We will know the truth here.

Twitter user, @ejdbdien18238 shared a pic claiming it to be the ‘first photo’ of Long March 5B. The pic captures smoke tracks in the sky, likely after something zooms past in an area. But is it Long March 5B? The tweet claimed so! “#ChineseRocket plz help this go viral first photo,” reads the caption of the pic.

However, the claim is fake. While the tweet did go viral, with some users being puzzled if the claim was true, a Twitter user, @Snoman314, and a few more pointed out the picture is of Chelyabinsk Meteor in 2013. The Chelyabinsk meteor was a superbolide that entered Earth's atmosphere over Russia on 15 February 2013 at about 03:20 UTC. The light from the meteor was brighter than the Sun.

In 2013, the Chelyabinsk meteor caused a force equal to 500 kilotons of TNT, tossing debris throughout the city and injuring more than 1,000 people. Chelyabinsk's infrasound hit sensors 9,000 miles away.

The Twitter user did not stop here. He went on sharing another video, claiming “#ChineseRocket it's In boys.” The claim again was false! The streak of lights in the video was caused by Falcon 9 rocket second stage debris that failed to deorbit and burned up after launch. The images and videos were from March 2021 and the streak of lights was spotted in parts of Washington and Oregon in the United States.

Watch the Video With Fake Claim!

Fake. It's the same F9 stage that reentered over the PNW in March.

Falcon 9 Rocket Second Stage Debris Spotted in Parts of Washington and Oregon, US

DID YOU SEE THIS? I have never in my life seen something so incredible. I am in awe. Just happened over Portland about 10 minutes ago. #LiveOnK2 pic.twitter.com/L9wLEXBrcW

Both the image and video went viral with a fake claim that they were Long March 5B debris. Besides, China's National Space Agency confirmed that while most of the debris was burnt up in the atmosphere, a large segment of the rocket re-entered Earth’s atmosphere and disintegrated over the Indian Ocean, ending days of speculations where the debris would it.

(The above story first appeared on LatestLY on May 09, 2021 10:21 AM IST. For more news and updates on politics, world, sports, entertainment and lifestyle, log on to our website latestly.com).