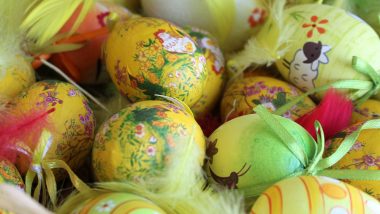 According to her plan, she chose to use plastic eggs and filled them with explicit pornographic images and fish-shaped crackers and delivered about 400 of them since Monday last week. After finishing her shift at a Publix grocery store,  Cestoni would deliver them to people's homes.  Former YouTuber Austin Jones Who Demanded Sexually Explicit Videos From Minor Girls Sentenced to 10 Years in Prison for Child Pornography.

While her act is extremely bizarre, Cestoni's reason for distributing the eggs is way crazier.  She said that she wanted to "educate people on the need for churches and pastors to give money to less fortunate," as per reports. "Abril stated she was 'a church' and had a business license. Abril said she was conducting research on local clergy and people deserved to know the truth", as per the arrest report received DM. Nurse Charged for Taking ‘Nude Photos of Elderly Patients’ and Sending Them to Her Boyfriend (Watch Video)

"She certainly has a bizarre almost zealous opinion of churches and what they should believe in and how they should teach the teachings of the bible," Sheriff Rick Staly said to Daily Mail. After being arrested, Cestoni has been charged with violating Florida's lockdown and is held at Flagler County Jail on a $7,000 bond.

(The above story first appeared on LatestLY on Apr 12, 2020 01:35 PM IST. For more news and updates on politics, world, sports, entertainment and lifestyle, log on to our website latestly.com).