The bronze artwork of Greta Thunberg, named ‘Make a Difference’ was commissioned by the university as an “inspiration for all students.” Ahead of its reveal for visitors, pictures of Great’s life-size statue has taken over social media. 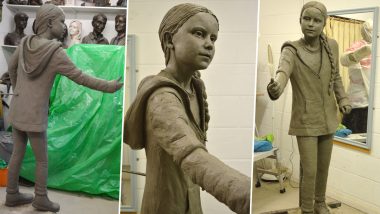 Greta Thunberg, the 18-year-old Swedish climate activist, has become the face of the growing youth movement demanding global climate action. The activist who started ‘Fridays for Future’ school strikes in 2018 in Sweden has now turned global, demanding governments to take drastic measures to cut back on carbon emissions. Greta is sure an inspiration to many students to put on their green caps. Honouring her movement and also to motivate students, Winchester University in England has erected a life-size statue of Greta. The bronze artwork named ‘Make a Difference’ was commissioned by the university as an “inspiration for all students.” Ahead of its reveal for visitors, pictures of Great’s life-size statue has taken over social media.

It took a year for the artist to build the statue, and as per reports, it is the first life-sized depiction of the 18-year-old climate activist. The statue is ready to be unveiled at the university on March 30, but the artists, however, have shared glimpses of the same on social media. The statue ‘Make a Difference’ is being completed by the British artist Christine Charlesworth and was commissioned by the university in 2019, at the cost of above 32,000 USD.

The statue has portrayed Greta standing with one of her arms outstretched. Initially, it was planned to make her display of sitting on the ground, wearing the yellow coat.

However, many locals reportedly criticised the move, with some pointing out that a sculpture of a well-known local, such as Kev Collick, would have been more effective. Kev Collick, the Big Issue seller, has been supporting several charities, donning a Christmas tree costume to raise funds for children in need.

(The above story first appeared on LatestLY on Mar 25, 2021 09:09 AM IST. For more news and updates on politics, world, sports, entertainment and lifestyle, log on to our website latestly.com).