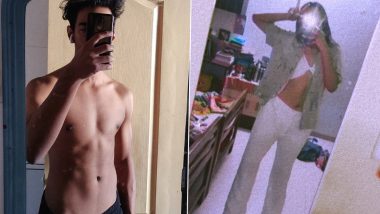 What kind of photos should one share on social media? This is an existent debate, ever since the internet became a significant part of our lives. It is important to watch what you post. But does that mean, you are supposed to limit yourselves from dressing up the way you want to while you share your pics on your Facebook, Instagram or Twitter? Well, at least that's what a misogynistic social media user posted on  Twitter and it has created quite a debate online! According to her, one should not make their Twitter account public and share ‘half-naked’ photos of themselves as it is ‘embarrassing.’ As expected, the tweet soon went viral, and netizens began to school her by sharing pictures of themselves, in skimpy clothes! ‘Half-naked or half-dressed,’ netizens embrace themselves, in their own beautiful way. Photos of women and men, showing off their perfect figures, part-covered, part-revealed, is now going viral on Twitter as a response to the viral tweet. Stefan Molyneux Tells Women to Get Married Young and Have Babies in a Viral Tweet, Twitterati Asks Him to Shut the F**k Up!

Twitter user, @kerathanspal tweeted, “stop making your account public everytime you post a half naked picture, you’re embarrassing yourself, (sic.).” The viral tweet is now deleted only before people took screenshots of it, which eventually went viral. Another Twitter user, @xsihaxx tweeted, “explain to me how this chick preaches about hyping girls up 24*7 but is out here shaming girls for posting and dressing how they want to,” with the screenshot of Kerat’s tweet. Man Compares Menstrual Cramps With Ankle Twist in Viral Tweet.

explain to me how this chick preaches about hyping girls up 24*7 but is out here shaming girls for posting and dressing how they want to. make it make sense girl💘 pic.twitter.com/h29WRJ2GwV

The tweet quickly went viral. People began schooling her by sharing pictures of themselves, half-naked, and embracing their bodies, the way it is. Photos and tweets called out the misogynistic view of the woman that wearing and sharing ‘revealing’ posts publically can be ‘embarrassing.’

Oh how embarrassing to be appreciating my body publicly 🤭🤭 https://t.co/QxQuwxhjaa pic.twitter.com/1xxA4mUgsF

I mean, its not half naked, its half dressed, be positive https://t.co/xiHKulUYNX pic.twitter.com/chFaJjUb3H

Ik i am late but wanted to feel embarrassed. 🥰🥰 https://t.co/2xYKLIfqM3 pic.twitter.com/J46lJLY3Vt

I'd call it confidence and self appreciation other than an embarrassment. https://t.co/jdCD8GSDTq pic.twitter.com/zDEdvnzBYI

just a general tweet which was in no way or manner meant to attack girls in the way they dress or post pictures. my aim was towards people who post a revealing pic and go public to chase clout but even in that sense I understand how it could be offending. and for that i apologize

We, as a society, have a tendency to jump to quick and very vocal judgements in the name of propriety. One area, where this has been painfully obvious for decades is the public shaming of women and men, who wear clothes that are ‘revealing.’ The Twitter user did apologise for her tweet, but it is important to note that fashion is a form of self-expression and our sense of personal style grows over time. There is nothing to be embarrassed about the clothing one choose to wear.

(The above story first appeared on LatestLY on Jul 09, 2020 08:42 PM IST. For more news and updates on politics, world, sports, entertainment and lifestyle, log on to our website latestly.com).