International Joke Day 2020: From Ramayan Funny Memes and X Æ A-Xii Jokes to My Plans vs 2020 and Lockdown Twitter Reactions, Hilarious Posts That Ruled This Year so Far! 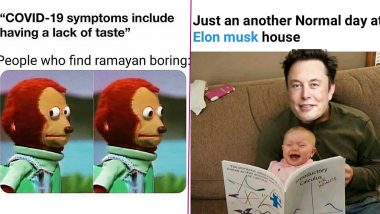 There were times when we used to wait for newspapers or magazines for the jokes columns. Now we have some jokes with pictorial representation and trending references in the form of memes and they have to be the best thing but year 2020 saw meme trends stem out of most of the curveballs thrown at us! So as we celebrate International Joke Day 2O20 that is observed every year on July 21, let's take a look at all the meme trend of the year so far.

This year someone, somewhere has started the Jumanji game and is in no mood to stop because one after the other things are happening proving that this year only gets worst. International joke day is said to encourage laughter, especially because the half of a year has been over and while we wait for the second half of the year why not laugh at all the funny things that have happened already? What better way to start the second half of the year than by chuckling and with a smile? A pioneer in laughter research, William Fry, claimed that it took ten minutes on a rowing machine for his heart rate to reach the level it would after just one minute of hearty laughter. While 2020 may have not given enough moments to be happy about, it sure gave us enough material to be entertained with funny memes and jokes! 'My Plans vs 2020' Funny Memes Take Over Twitter, Netizens Joke About How Disappointing This Year Is Shaping Up to Be!

Here's 2020, the worst year was expressed by meme makers:

Massive Oil Spill, Yeah That Was Left Out!

#2020WorstYear memes, took over social media with funny memes and jokes.  Twitter and the rest of the social media users expressed their dissatisfaction over this year

Similarly,''MyPlans vs 2020' funny memes took over Twitter since 2020 didn't stop being the worst year., People shared jokes on #MyPlansvs2020 and they were as hilarious as bad the year is. Check out the best ones here:

This year amid lockdown, Ramayan re-aired and it made the mythological show more popular than ever amid millennials than ever. Funny Ramayan memes and jokes are proof.Fans loved Lakshman's wit and sassy comebacks. Lord Lakshman is touted as India's first 'Angry Young Man' on social media. Ramayan Funny Memes and Jokes: From Ravana Vadh and Lakshman's Comebacks to Hilarious Posts about Vibhishan and Kumbhkaran, Don't Miss Any Reason To LOL Today! Apart from that characters of Ravan and Hanuman played by Arvind Trivedi and Dara Singh won everyone's heart. In fact, after a video of 82-year-old Arvind Trivedi watching himself as Ravana on the television screen and asking for forgiveness for kidnapping Devi Sita went viral! Check out memes:

This year Parle G became the biscuit bought in most homes during the lockdown.  Check out parle g memes:

Parle-G books highest sales in 82 years.#ParleG to other biscuits : pic.twitter.com/DiGVaf4aMq

The year so far was all about lockdown extensions comes and people flooded social media with funny memes and jokes! #Lockdown5 Funny Memes and Jokes Trend on Social Media, Netizens Use Humour As Shield to Combat Lockdown Extension Fear.

*#lockdownextension till 31st July in Maharashtra*

Unlock funny memes took over after that! While some post updates about their areas, others share funny memes and jokes describing the situation.

Phase 1 of Unlock from today

How It Will Look in Some Places

People coming out of their houses to visit restaurants and malls today. #Unlock1 pic.twitter.com/qPZnhXk3pv

India is on 5th place in the world to have corona cases and govt. opens malls, temples ans restaurants.

How many zeroes are there in 20 lakh crore? Netizens wondered when Narendra Modi was announced such a huge amount for relief amid COVID-19! Was Imran Khan counting the number of zeros in the amount?! Well,  at least they don't seem to stop making jokes about Pakistan ever since the announcement has been made:

The year will also be remembered for the Mahabharata between Youtubers and TikTokers after CarryMinati expressed hate towards TikTokers via his roast video! From his popular catchphrase, "To Kaise Hai Aap Log" to him dispicing TikTokers, Carry Minati went viral on social media after he broke YouTube with his "YouTube vs TikTok: The End" video.

Laughing helps you relax like a good massage. Not just that it is also known to boost your immune systems and release the happy hormones, endorphins. This joke day share a meme with your loved ones

(The above story first appeared on LatestLY on Jul 01, 2020 08:30 AM IST. For more news and updates on politics, world, sports, entertainment and lifestyle, log on to our website latestly.com).