In a video being circulated on social media, actor Arvind Trivedi, who played Ravan in the show, is seen watching the 'Sita Apaharan' episode and ends up apologising to viewers. 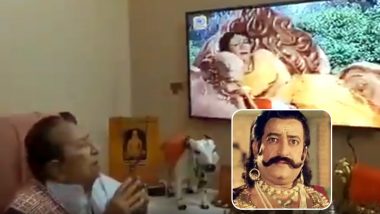 Ever since Doordarshan has brought back its epic mythological shows Ramayan and Mahabharat, the shows always make it to social media as trends with fans discussing various factors from the show and highlighting their importance. Just last night, Ramayan was trending on social media for its episode where Angad goes as a messenger to Ravan and challenges the king to move his leg. The scene still had the impact that it did back when the show first aired and was immensely applauded by the masses. Ramayan: Twitterati Hails 'Savage' Character Angad In The Latest Episode, Compare Him With Thor's Mjolnir! Check Funny Tweets and Memes.

And while the good characters are making it to the news every now and then, Ramayan's baddie Ravan has also made it to the news now. In a video being circulated on social media, actor Arvind Trivedi, who played Ravan in the show, is seen watching the 'Sita Apaharan' episode, and ends up apologising to viewers. Did Doordarshan Air Ramayan Using Moser Baer DVD's Watermark? Here's The Fact Check On Streaming Controversy.

Back when Ramayan aired, it had become a ritual for the viewers to move their day's schedule around the show's telecast. The audience was so sentimental with regards to the show that they would take a bath and remove their slippers to sit before viewing the Ramanand Sagar epic. In fact, actors Arun Govil and Deepika Chikhlia, who played Ram and Sita in the show, were considered real-life Gods with people stopping to take their blessings whenever they would come across the actors. Hence proved, Ramayan was not just a show, it was an emotion and still is!!

(The above story first appeared on LatestLY on Apr 13, 2020 08:31 AM IST. For more news and updates on politics, world, sports, entertainment and lifestyle, log on to our website latestly.com).