International Women's Day 2020: Jane Goodall to Winnie Harlow, 5 Women Who Are Changing The World With Their Work

As we celebrate International Women's Day 2020, here are five women who are changing the world one step at a time. From making the fashion industry more accepting, promoting environmentalism, girls education, philanthropy and gender equality, the women in the list excel in their fields. 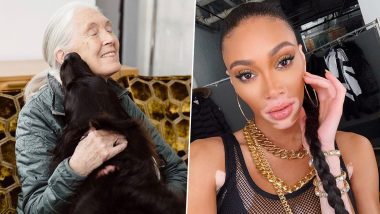 International Women's Day will be observed on March 8 across countries with great fanfare. The day celebrates women, their achievements and needs for the fulfilment of their rights. As we celebrate International Women's Day 2020, here are five women who are changing the world one step at a time. From making the fashion industry more accepting, promoting environmentalism, girls education, philanthropy and gender equality, the women in the list excel in their fields. They are not only examples for the world to follow, but is an inspiration for the upcoming generation. These powerful power have paved the way for the rest to aspire for a better future, now we as a society have to accept the change and focus on evolving. International Women's Day 2020: From Holding a Menstrual Supply Drive to Supporting Female Education, Here Are Legit Ways to Uplift and Empower Women Globally!

Winnie Harlow walks down the ramp at fashion shows just like any other models, expect, she has vitiligo, a disease in which the patient loses the colour of the skin. She was diagnosed with the skin condition at the age of four but today, she is known beyond the colours of her skin. Winnie was bullied a number of times in school which led her to depression and even suicidal thoughts. However, she grew out of her fears and began to follow her dreams. Harlow was discovered on Instagram by model and actor Tyra Banks and appeared on America’s Next Top Model following which her career sky-rocketed. In 2011, Winnie first spoke about her skin condition publicly in a YouTube video titled 'Vitiligo: A Skin Condition not a Life Changer'. Winnie Harlow has redefined beauty standards and broke many stereotypes for the fashion industry.

Malala, a Pakistani activist for female education is the youngest Noble Prize laureate. She was shot in the head at the age of 15 by the Taliban while going to school, but she survived the deadly attack. Today, she is a champion of education rights for girls and has received over 40 awards for bravery and activism. Some of her achievements include her works leading to the Pakistan government announcing the creation of the first Right to Education Bill, co-authoring a book named 'I Am Malala', and opening an all-girls school for Syrian refugee among others. She is an ardent advocate of girls education and speaks the importance of equality and women's rights on all podiums she goes. Women's Day 2020: Ditch Flowers! Here Are REAL Gifts Women Want To Make a Better World For Themselves.

At times when climate change and global warming are limiting the life of our ecosystem, Primatologist Jane Goodall still has hope left. A foremost expert in chimpanzees, she has made quite a lot of contributions to science and environmentalism.  She has written 15 books about her works and has published 11 books for children and have received awards, such as the 'Outstanding Publication in Wildlife Ecology and Management'. She started the Jane Goodall Institute' where she promotes the protection and conservation of animals species and the environment.

Melinda Gates is known as the most powerful woman in philanthropy. She co-founded the Bill & Melinda Gates Foundation, the world's largest private charitable organization as of 2015 with her husband Bill Gates. The foundation which is worth more than $50 billion and has helped improve health and education in over 130 countries. Melinda also donated $560 million in 2012 to improving female contraception in impoverished areas. Her charitable efforts have won her the Presidential Medal of Freedom by Barack Obama in 2016. She has also announced her new mission of working on the lack of women in tech in 2016.

Hermione Granger from Harry Potter is known by various titles today. English actress Emma Watson is the Women Goodwill ambassador for HeForShe where she promotes gender equality and women empowerment. Talking about her role as the ambassador Emma said that she is "fighting for women’s rights has too often become synonymous with man-hating. This has got to stop". In her movies and talk shows also, she portrays the need for a gender-equal society which does not believe in gender-appropriate roles.

(The above story first appeared on LatestLY on Mar 08, 2020 10:00 AM IST. For more news and updates on politics, world, sports, entertainment and lifestyle, log on to our website latestly.com).