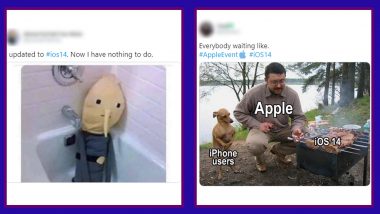 iPhone users are rejoicing as their smartphones upgrade to a new operating system. Apple made the special announcement about new system rolling out and iOS 14 rolled out yesterday. The new update went live for India along with global markets and like everything it has caused a buzz online. Those who have got the new update are sharing the features that they have loved the most, screenshots of how the new update looks and others have reacted with funny memes and jokes. Most users are happy with how neat and clean the new feature looks while others are waiting to receive the new update notification on their phones. Apple iOS 14, iPadOS 14, watchOS 7 & tvOS 14 Officially Announced; Check Features & Compatible Devices.

iOS 14 was unveiled at the Apple Event 2020 in June and users were expecting it by this year itself. Even back then people reacted with funny memes and jokes on the home screen feature. With new update, users can add widgets directly to the screen. So pictures of how the new homescreen looks are all over Twitter. Other updates include, 20 new fonts, Picture in Picture, major Siri improvements and overall a much streamlined iOS interface. The excitement to have the new iOS is seen on the instant reactions on Twitter, as people share what they loved the most, some also pointed out flaws and others resorted to making memes and jokes. #iOs14 is now trending on Twitter with mixed reactions.

#iOS14 is the bomb 💣 pic.twitter.com/ii22xJViCd

Me: Okay please tell me the time pic.twitter.com/roBpxBGGLH

Updated, Now What to Do?

I updated to #ios14. Now I have nothing to do. pic.twitter.com/42qoS9pdUz

Waiting for the blue line to move like #iOS14 pic.twitter.com/kyZUBf4dvy

Most people seem to have got the newest update and are loving the new interface. Have you got the new upgrade yet? Android users can just enjoy the funny memes and jokes that express what iPhone users are going through.

(The above story first appeared on LatestLY on Sep 17, 2020 01:13 PM IST. For more news and updates on politics, world, sports, entertainment and lifestyle, log on to our website latestly.com).