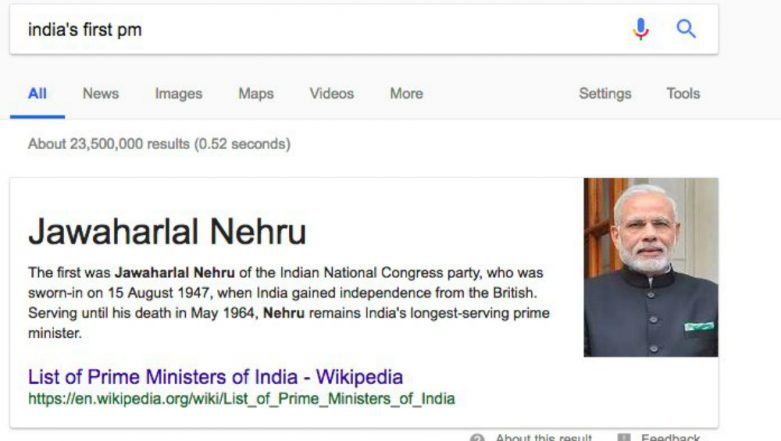 The Screenshot of the search result that showed PM Modi's image against the name and info of Jawahar Lal Nehru (Photo Credit: Screenshot/Twitter)

An algorithm glitch that showed Prime Minister Narendra Modi's photo as "India's first PM" on Google Search and led to much outrage on Twitter has been fixed.

Users who searched for "India's first PM" on Google late on Wednesday, were guided to the first link of the Wikipedia page titled "List of Prime Ministers of India", with Jawaharlal Nehru's name and description.

However, instead of Nehru's picture, the image which appeared was of Modi which prompted people to take screenshots of the search result page and tweet in large numbers.

"@Google @GoogleIndia what algorithm of yours allows this?! You're so full of junk-", tweeted Congress social media in-charge Divya Spandana.

Many tagged the search engine giant asking what exactly was going on.

"Dear @Google you got it wrong. I googled "India's #first PM, Not worst PM ever!" Please correct yourself," said one tweet.

"I came to know that #jawaharlalnehru look alike @narendramodi ??" said one.

When brought to Google's notice, the glitch was fixed on Thursday. While, some search results still shows the wrong image at the time of filing this report.