BTS received two trophies—“Best Pop Song,” and “Best Song of the Year,” for its mega-hit, Grammy-nominated Dynamite. The official Twitter handle of BTS shared the band’s latest achievement at the 18th KMA, and fans are in a celebratory mood. Because, why not! 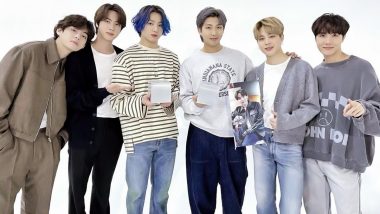 The Bangtan Boys, aka BTS, just bagged another feather to the cap by grabbing two awards in major categories at the Korean Music Awards 2021. Yes, you read that, right! While ARMYs may not be extremely surprised, considering the K-Pop boy band's constant success, the announcement surely gave them another reason to celebrate. BTS received two trophies—“Best Pop Song,” and “Best Song of the Year,” for its mega-hit, Grammy-nominated Dynamite. Naturally, ARMYs can’t keep calm! The official Twitter handle of BTS shared the band’s latest achievement at the 18th KMA, and fans are in a celebratory mood. Because, why not!

BTS have been earning back to back success, and in no doubt, the recent years made them a global sensation. Their hard work has paid off, extremely well! With Dynamite being the boy band’s first full English song, BTS continued to enjoy success. From making their debut at No. 1 on Billboard’s main singles chart to earning a Grammys nomination, BTS is surely lighting it up like “Dynamite.”

KMA is in its 18th year. It is an annual award ceremony that recognises musicians on the basis of artistic achievement rather than popularity only. The event was held without an audience for a second straight year because of the COVID-19 pandemic. Not only BTS, alternative pop band Leenalchi and folk singer-songwriter Jeongmilla scooped up multiple awards, including top prizes. Legendary rock band Deulgukhwa also reportedly won a special award for its contributions to the Korean music industry. But ARMs are here for BTS, and their major win gave fans another reason to flood Twitter timeline with Bangtan Boys success.

bts arent just artists; they r a cultural reset, the oxygen you breathe, they're a lifestyle, an escape from this cruel world filled with thieves, an art, the first gift you open on christmas, a hug from a loved one, everything you’ve ever wanted.pic.twitter.com/3rvS9TOQCG

We love you so much Bangtan 🤗🥰 pic.twitter.com/dasHmWNhlL

BTS recently became a victim of racism after Bayern3 German radio presenter Matthias Matuschik passed on hateful remarks and “jokes” against the K-Pop boy band, which enraged the ARMY. However, BTS continue to rule the hearts with the support and love of their significant worldwide followers.

(The above story first appeared on LatestLY on Feb 28, 2021 07:21 PM IST. For more news and updates on politics, world, sports, entertainment and lifestyle, log on to our website latestly.com).