Video of an absentminded man falling onto the railway tracks has gone viral on social media platforms. A clip shows him slipping from the edge of the platform to the tracks while looking into his phone. 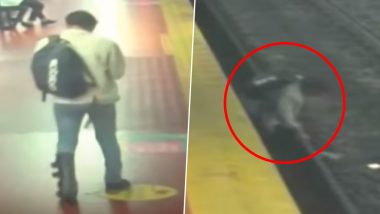 Video of an absentminded man falling onto the railway tracks has gone viral on social media platforms. A clip shows him slipping from the edge of the platform to the tracks while looking into his phone. The incident happened on the Aguero stop of the D line in Buenos Aires, Argentina on November 13. While the identity of the man is not known he is said to be 49 years of age. After he fell, passers-by immediately came and pulled him back to the tracks. The video shows him lying on the platform after which railway staff arrived and took him on a stretcher. Thereafter, he was attended by medics and given emergency medical aid. Uttar Pradesh: One-Year-Old Girl Escapes Unhurt After Passenger Train Runs Over Her at Mathura Railway Station; Watch Video.

Reportedly, he was wearing an orthopaedic brace when he fell to the tracks. After being given immediate medical aid, he refused to be taken to the hospital for a check-up. There have been multiple incidents of people falling on railway tracks in the past, lucky to be saved in time. There has also been an increase in accidents caused by people looking into their smartphones while trying to cross streets or driving.

A similar incident had occurred last month when a woman fell on railway tracks after a man unknowingly lurches towards her. She was termed quite lucky as a train was approaching on the same railway line. The driver had managed to stop it on time a couple of feet away from where she was lying. The incident had happened at the Pueyrredon D line station, also in Buenos Aires.

(The above story first appeared on LatestLY on Nov 29, 2019 09:05 AM IST. For more news and updates on politics, world, sports, entertainment and lifestyle, log on to our website latestly.com).