Thick smoke and strong winds in Oregon left the region look lit up in red and it painted a scary picture. Pictures and videos of the situation have been shared online and people are left with the same "end of the world" thoughts. 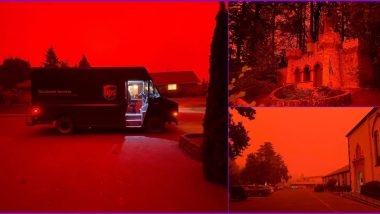 Is the world ending? That's a question that keeps popping up every time something bad occurs around the world these days. But pictures from the recent fires in Oregon will make you ask the same question, even if you don't want to think of it. The massive wildfires burning in Washington and Oregon over the past few days turned the skies into a dark red and orange in broad daylight. Thick smoke and strong winds left the area look lit up in red and it painted a scary picture. Pictures and videos of the situation have been shared online and people are left with the same "end of the world" thoughts. Horrific Picture Captures Massive Lightning Strike Causing Wildfires in California, Check Other Scary Fire Tornado Videos From The Disaster.

The Governor declared a wildfire emergency in Oregon following the fire spreading. The small fire incidents are turning into major ones due to the severe winds. Thousands of people were given evacuation orders this week. The humidity in the weather will also fuel more wildfires starting over again. Soon clear skies turned smoggy and took the hues or orange soon turning to red. The scenes looked apocalyptic and some users were reminded of the end of the world. Unreal! 11 Waterspouts Spotted Spinning Together Offshore Louisiana, Viral Pics and Videos of Intense Water Tornadoes Are Scaring Netizens.

Guys. So Oregon is on fire, and this is what the sky looks like where I live. It feels like the end of the world. Super creepy 🥺😫 pic.twitter.com/zRu5pgErMa

It's bad south of there too. This was Laytonville, CA at 2pm today. Also in the redwoods, but a couple hundred miles from Oregon. pic.twitter.com/EP5XR3rA6u

Insane skies right now in Stayton, Oregon. 🤯 Crazy these images aren’t from the early morning or late at night... this is the view at 11 am. #Oregon #Stayton #Wildfire #OrWx #Pnw #Fire #haze #news @fox12oregon pic.twitter.com/kL7GePmjTX

unedited no filter pictures of the enchanted forest, a storybook theme park in turner oregon, due to ongoing growing fires in the surrounding areas everyone stay safe pic.twitter.com/o0IxxTc7Ac

The pictures show how dangerous the situation would be right now for people living here. The smog makes it more difficult to breath in the environment. Many others have shared similar scenes of red skies in their areas in broad daylight. Others have prayed for the safety of those having to face these miserable conditions.

(The above story first appeared on LatestLY on Sep 09, 2020 02:19 PM IST. For more news and updates on politics, world, sports, entertainment and lifestyle, log on to our website latestly.com).