A photographer from Florida has captured a disheartening picture which once again highlights what humans are doing to the environment. A woman in Florida captured a shocking moment of a black skimmer bird feeding its chick a cigarette butt. 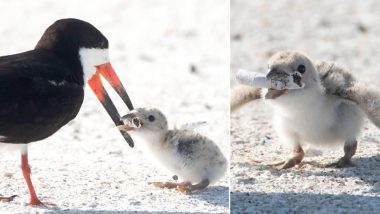 Littering and poor waste management systems are badly affecting the other members of our ecosystem. Birds, mammals or sea creatures, every other lifeform is suffering due to the rising plastic pollution, which is choking the environment. A photographer from Florida has captured a disheartening picture which highlights the problem. A woman in Florida captured a shocking moment when a black skimmer bird fed its chick a cigarette butt! The image is going viral on social media, raising some pertinent questions about littering. Plastic Pollution: Photographer Captures a Bird Offering Plastic Waste as a Mating Gift to Partner, View Heartbreaking Pic!

A woman identified as Karon Mason shared two pictures on her Facebook, one with a mother bird feeding her chick a cigarette butt and another picture in where the chick is carrying the butt in its mouth. She captured the shocking moment on a local beach in Florida. In the caption, she wrote, "If you smoke, please don’t leave your butts behind." Turtles From All Seven Oceans in The World Have Microplastics in Their Body! New Study Reveals Shocking Extents of Plastic Pollution.

Picture of The Skimmer Bird Chick Carrying the Piece of Waste:

The disheartening pics show the extent of human irresponsibility and attitude towards their environment. People on social media praised Karen for creating the much-needed attention about the issue of littering in public spaces. The photo is indeed an eyeopener of what our actions can lead to.

(The above story first appeared on LatestLY on Jun 28, 2019 02:25 PM IST. For more news and updates on politics, world, sports, entertainment and lifestyle, log on to our website latestly.com).