Amid the ongoing struggle, a coastal town in Japan reportedly spent COVID relief funds and built a giant squid statue to boost tourism. The 43-foot statue of a flying squid was built in Noto, where the squid is a delicacy. 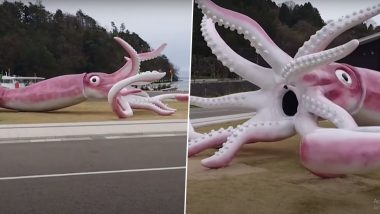 Countries around the world continue their struggle to curb the further spread of the coronavirus that has put life to a standstill. While a few places may try to rebuild following precautions, others are significantly focusing on the vaccine drive. Likewise, Japan also continues its battle to contain the further of virus. Amid the ongoing struggle, a coastal town in Japan reportedly spent COVID relief funds and built a giant squid statue to boost tourism. The 43-foot statue of a flying squid was built in Noto, where the squid is a delicacy. With the report, videos, and photos going viral online, the move certainly raised some eyebrows.

Battling a fourth wave of the pandemic and struggling with a sluggish vaccination campaign, Japan’s government is seeking to extend a state of emergency in Tokyo and three other areas until the end of May to curb a surge in COVID-19 cases, as the capital city prepares for the Olympics. While a majority of the public is reportedly opposed to the games, videos, and pictures of the giant squid statue have raised eyebrows.

According to CNN, the town of Noto was awarded 800 million yen (7.3 million USD) in grants from the central government as part of an aid program aimed at boosting local economies amid the pandemic. From that amount, the town used 25 million yen ($229,000) to cover part of the cost of building the statue. Squid is a local delicacy in Noto, and building the statue, was reportedly part of a ‘long-term strategy to raise awareness about the town’s fishing industry and boost tourism. The pink squid statue is about 13 feet high and 29.5 feet long, and the construction cost around 30 million yen ($274,000).

I guess no one was sick or died from Covid-19 in Japan since a squid statue was worth using Covid Relief Funds on this.

A Japanese town spent $230,000 in COVID relief money on a statue of a giant squid.

Japan has been averaging over 5,000 new cases per day. https://t.co/77ymyKyYkH

Japan has controlled the virus better as compared to many other countries. However, faced a recent spike in cases. Some of the country’s biggest metropolitan areas, including Tokyo, Osaka, and Kyoto, are under a state of emergency, and as noted earlier, the government is seeking to extend the restrictions. The surge has sparked a new round of economic restrictions, criticism of the country’s slow vaccine rollout, and also questions if Tokyo Olympics should be held as per the schedule.

(The above story first appeared on LatestLY on May 07, 2021 12:35 PM IST. For more news and updates on politics, world, sports, entertainment and lifestyle, log on to our website latestly.com).