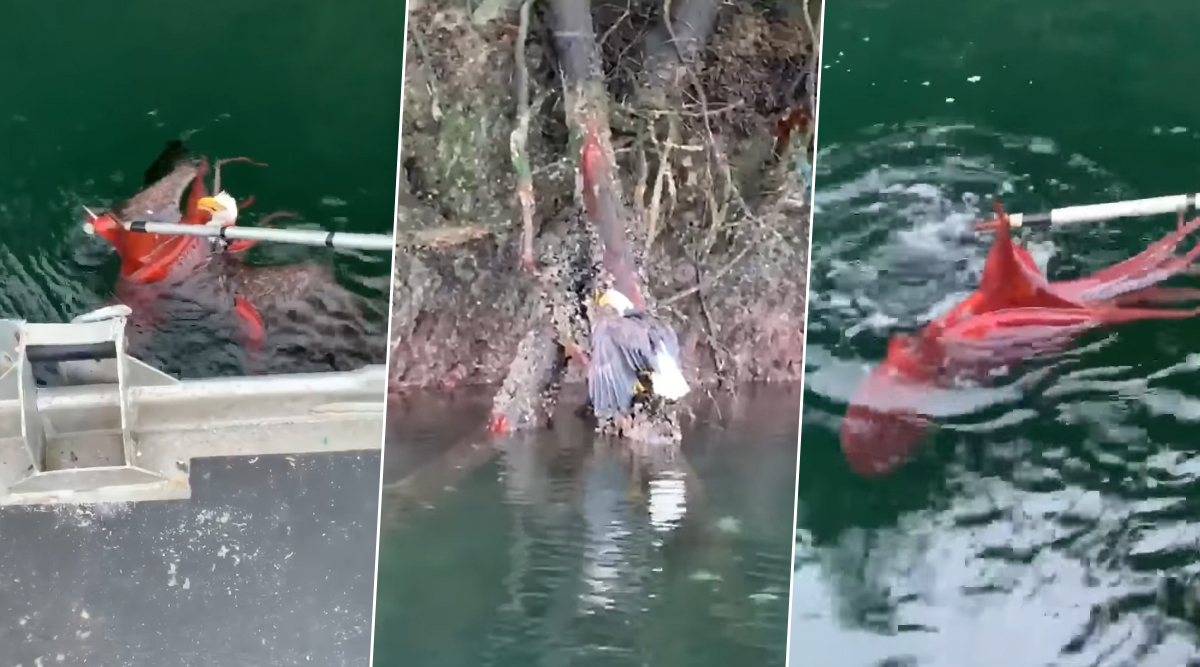 We have seen videos of birds making swift preys of fish or other marine creatures in the lakes and oceans. But rarely has its striked back on the predator. But a rare clash was seen between a bald eagle and an octopus on a fish farm in Canada's Vancouver Island! An bald eagle's attempt of making a prey out of an octopus backfired on it, when the octopus extended its tentacles as a counter attack. The eagle was pulled in water and the octopus tried hard to make the eagle its prey! But a group of salmon farmers were around who managed to save the bird. A video of this unlikely clash between the eagle and the octopus was shared online and is now going viral. Seal Slaps Kayaker With an Octopus on His Face, Video Goes Viral!

A lot of birds who eat fishes are known to make swift attacks after observing their preys for a while. Eagles have an equipped vision which makes them track their prey from a distance. The eagle probably decided on taking down an octopus, underestimating the strength of the tentacled creature. In the one-minute clip that has been shared online, the bald eagle is struggling for its life gripped within the tentacles of an octopus. A group of salmon farmers who were on their float house heard screeching of the bird from a distance. On looking further, they saw the rare fight between the eagle and an octopus. Octopus Grope Woman Diver’s Butt: Video of Flirty Eight-legged Sea Creature Goes Viral.

Watch The Video of Octopus Try to Kill an Bald Eagle:

One of the farmers John Ilett told to CNN, they saw "a full-sized eagle submerged in the water with a big giant octopus in the water trying to drag it down." He also mentioned that they were sceptical if they should intervene but the sight was heart-breaking. He said, "But it was heart wrenching to see this octopus was trying to drown this eagle." He then used a pole and tried to break their scuffle. Thankfully, the octopus loosened its grip and the bird was able to get back to the shore in that time. The bird reached the shore and flew away after 10 minutes. It was indeed a close call between a prey and a predator here.