Facebook-owned app, WhatsApp is surely trying its best to convince users that they are not spied on. But netizens had other plans! They are LOLing at the WhatsApp Status while poking fun at the app. The hilarious memes and jokes on WhatsApp Status are a must-see! 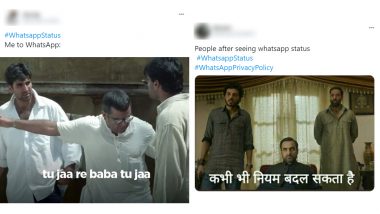 WhatsApp is finding itself in a difficult place after it rolled out the controversial privacy policy, earlier this year. Users flocked to other alternative apps like Signal and Telegram, which are more privacy-centric and available on Android and iOS. Following massive criticisms online, WhatsApp application began to display ‘status’ stories on users accounts over its latest privacy policy. Is it the ‘power’ or ‘fear’ of social media? Whatever it is, the Facebook-owned app is surely trying its best to convince users that they are not spied on. But netizens had other plans! They are LOLing at the WhatsApp Status while poking fun at the app. The hilarious memes and jokes on WhatsApp Status are a must-see!

After users were alarmed with WhatsApp privacy policy, which if not accepted, accounts will be deleted, people rushed to Twitter complaining about the same. Some feared that accepting the privacy policy might allow Facebook to spy on them. Hence, many switched to other alternatives such as Telegram and Signal. Ever since then, WhatsApp has been trying its best to convince people that their privacy won’t be breached. The app released FAQs clarifying about its privacy policy update. The company even went on delaying its update rollout till May, amid major backlash and ‘confusion’ around it globally. Now the Facebook-owned app is sharing status stories.

Users, after entering to Status stories on their account, can see the application’s status defending itself over the privacy policy. The status stories include four slides, clarifying its take on the latest update.

Here's How the WhatsApp Status Appears!

How I am getting status updates from #WhatsApp ?#WhatsappStatus pic.twitter.com/vJPyMtP7rr

Whatsapp trying to repair the damage like a desperate simp is kinda cute.#WhatsappStatus pic.twitter.com/yFR8oOib7O

Netizens are having a wild time right now. After coming across WhatsApp status, people are making funny memes and jokes, laughing at the app’s move to convince users over data breaching.

Without saving the number today I am seeing status of whatsapp...

Users Who Switched to Signal!

Meanwhile the people who have already switched to #Signal App: pic.twitter.com/YiW6Rvwfia

Yes, We Were, WhatsApp!

WhatsApp is currently clearing out the extent of ‘confusion’ on its latest update. The company noted that the new update would be inclusive of new options and it will be regarding business on WhatsApp helping people and being more transparent about the same. It even stated that the update does not expand its ability to share any data with Facebook.

(The above story first appeared on LatestLY on Jan 17, 2021 10:37 AM IST. For more news and updates on politics, world, sports, entertainment and lifestyle, log on to our website latestly.com).