A TikTok video of a woman performing aarti as a girl holds the pup has gone viral. The rituals look like that of welcoming an Indian Hindu bride to their husband's house after marriage. It may also remind you. In the meanwhile, a similar video of another family welcoming a puppy to their homes with a full-fledged ceremonial welcome had gone viral. 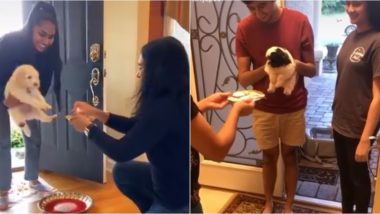 Hindu families by tradition ensure they do puja before getting anything home. They do a small ceremony blessing the thing or person which is believed to be for good luck. A recent video which is going viral on social media platforms shows a puppy receiving similar treatment on arriving at home. A TikTok video by user Shreyagid shows a woman performing aarti as a girl holds the pup. The rituals look like that of welcoming an Indian Hindu bride to their husband's house after marriage. It may also remind you of 'Griha Pravesh Puja' that people conduct before first entering a house. Also, the ritual is quite popular when people who have been staying away from family, come to visit them, especially among NRIs, that was popularised through Bollywood movies. In the meanwhile, a similar video of another Indian family welcoming a puppy to their homes with a full-fledged ceremonial welcome had gone viral. National Puppy Day 2020: Adorable Videos of Cute Puppies That Will Make You Smile!

The first video was shared with background music of the title song of Kabhi Khushi Kabhi Gham relating it to how welcoming someone home through a ceremonial puja became popular through it. The video was shared with the caption, "My new favourite thing is desi families welcoming their new puppies with traditional ceremonies." In the clip, they also dipped the pup's paw in colour as put him on a sheet, so as to capture his first impression in the house. International Dog Day 2020 Funny Memes, Quotes & Cute GIFs: Adorable Puppy HD Images, Viral Videos, Messages and Wishes to Celebrate the Day Dedicated to Canines.

The second video also plays Kabhi Khushi Kabhi Gham song in the background. They can also be seen dipping its paw in red colour and then taking an imprint of it, as Indian Hindu brides do.

Both the videos of puppies performing 'Griha Pravesh Puja' have now gone viral with people taking inspiration from it. They are simply cute and the innocence on the face of those little ones are too adorable. Seems more people are going to arrange a grand welcome for their new pups!

(The above story first appeared on LatestLY on Sep 22, 2020 03:08 PM IST. For more news and updates on politics, world, sports, entertainment and lifestyle, log on to our website latestly.com).