Sharing a lip-sync video on Twitter, Ranveer Singh, who played the leading role of Ram in the Bhansali's directorial, wrote: "Leela jaisi koi nahi (No one is like Leela)!" Watch the clip here! 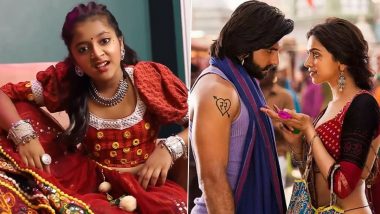 Bollywood star Ranveer Singh has shared a video of a young girl channelling the character of Leela, played by actress Deepika Padukone, from the film Goliyon Ki Raasleela: Ram-Leela. In a short clip from Moj, a young girl sporting a lehenga choli, lip-syncing Deepika's look from film was seen nailing the expressions while delivering some iconic lines by Leela from the Sanjay Leela Bhansali film. Ranveer Singh Has Found ‘Choti Deepika’, Shares a Fan’s Video Acting Out a Scene From Ramleela (Watch Video).

Sharing a lip-sync video on Twitter, Ranveer, who played the leading role Ram in the Bhansali's directorial, wrote: "Leela jaisi koi nahi (No one is like Leela)!" Tagging his Deepika, added: "Check out this mini version of you!" while praising the young talent. "Love the expressions!" he wrote dubbing the girl 'Choti Deepika'.

Check out this mini version of you! @deepikapadukone

(The above story first appeared on LatestLY on Feb 09, 2022 04:48 PM IST. For more news and updates on politics, world, sports, entertainment and lifestyle, log on to our website latestly.com).