The incident which caused panic among people resulted in social media outrage. 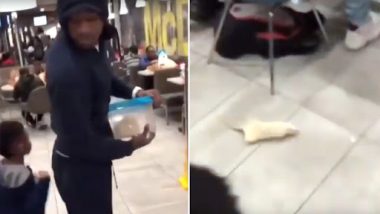 Customers at a McDonald's outlet in New Jersey ran helter-skelter after a man released a white rat inside the restaurant. A video going viral on social media shows people jumping over chairs and tables finding a way out of the fast-food place as the rat goes scurrying by. The incident happened at an outlet located on 772 Broad Street in Newark on February 5. Maggots Found in McDonald’s UK and KFC India Meals! McD Promises Action, KFC Refutes Allegations.

The video which was massively shared on social media shows a man walking inside a McDonald's outlet holding a rat inside a pet container. Accompanied by a kid, he gets into the fully packed restaurant while the boy keeps telling him to hand over the rat. Paying no heed to the child, the man walks to the middle of the restaurant and opens the container making the rat jump to the floor. People can be seen running for their lives seeing the rodent.

The incident which caused panic among people resulted in social media outrage. People commented on social media that such behaviour should be not entertained. Many said that he not only caused trouble to the people, but also the rodent. A comment reads, "None of this is cute! None of it! The poor little boy who was with him is now learning this behavior and thinks it’s okay to abuse animals to entertain people. I’m so disgusted by this." Pregnant Woman in China Finds Dead Rat in Her Soup, Offered Money for Abortion! Restaurant Loses $190Mn.

Talking about the incident, McDonald's operator Celest Quintana, was quoted as saying, "The safety of our customers and the cleanliness of our restaurants are our top priorities. Following this incident, our restaurant staff thoroughly cleaned and sanitized the dining area and contacted the police. We are currently working with local law enforcement to identify the person responsible for this deliberate act."

(The above story first appeared on LatestLY on Feb 15, 2019 04:06 PM IST. For more news and updates on politics, world, sports, entertainment and lifestyle, log on to our website latestly.com).