Roger, The Famous Muscular Kangaroo From Australia Passes Away, View Pics of The Ripped Marsupial 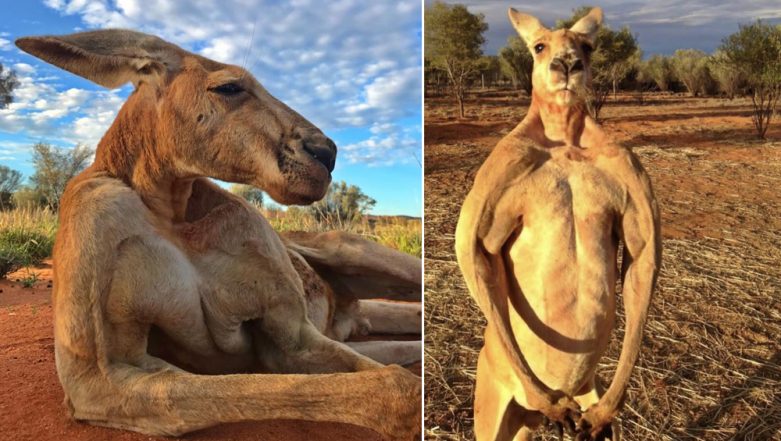 Australia is known as the kangaroo land and a kangaroo named Roger was very famous on the internet. Distinctly different from the usually jumpy ones, Roger was really an athlete. Rescued as an orphan, the marsupial grew up to be the most famous buff kangaroo in the world and has now left the world. Roger was 12 years old and died because of his age. At a height of more than 2 metres and close to 90 kgs, Roger was a really muscular kangaroo. Kangaroo Enjoying on Football Pitch in Australia Will Take Away Your Monday Blues, Watch Pics and Video.

Roger's built was enough to set him apart from other kangaroos and one look at him would clearly leave an impression. A traumatic situation separated him from his mother in the year 2006. Roger's mother died in a car accident on a highway and he was rescued from her pouch. The kangaroo was looked after by The Kangaroo Sanctuary Alice Springs in central Australia. The facility looked after Roger with much love and care and informed about his demise on their Facebook page. Australian Cops Rescue Kangaroo Drowning in Seawater, Video Goes Viral.

Take a Look at Picture of Roger, the famous Kangaroo

Some More Pics and Videos of Roger, the Kangaroo Which Made Him Famous

Roger ❤️ 💪🏽 When Roger was alpha boss male his height when standing was about 2 metres (6ft 7) - same height as me. The clucking noise he is making is telling me to get away from his lady kangaroos. And the red on his neck is a scent that males rub onto trees etc to mark their territory.

Roger shows everyone how to relax 😎🧡

Doesn't he look graceful? In their Facebook post, they wrote, " He lived a lovely long life and was loved by millions around the world. We will always love you and miss you Roger." Roger was indeed a charm of the entire facility. He grew to become an alpha male in the facility with 12 partners. Pictures of fully grown, ripped kangaroo with muscular physique went viral. No sooner he became the most famous kangaroo in the world.