Sonam Wangchuk, Man Who Inspired Aamir Khan's 3 Idiots Character Rancho, Urges Indian Citizens to Get Rid of Products Made in China in This Viral Video 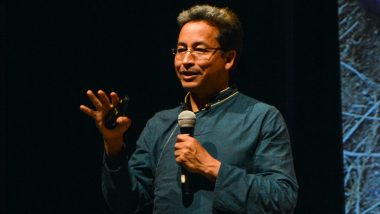 Coronavirus has significantly affected China, after it was first originated in Wuhan. The number of cases has decreased, but the country continues its battle to regain the economy, which was severely impacted during the lockdown. Now another tension emerged—border tension between India and China. According to reports, Chinese troops engaged in physical brawls with Indian soldiers in Sikkim and Ladakh sectors. Soon, reports came in that Chinese President; Xi Jinping asked the People’s Liberation Army to ‘scale-up’ battle preparedness for worst-scare scenarios. Amid the tension, innovator, Sonam Wangchuk, the man who inspired Aamir Khan’s character, Rancho in Bollywood hit 3 Idiots, have urged Indian citizens to boycott products which are ‘Made in China.’ Talking on a viral video, uploaded on his YouTube channel, Wangchuk says, “Give up all Chinese software in a week, all Chinese hardware in a year.” India-China Stand-Off Continues in Ladakh, Top Commanders of Indian Army to Carry Out In-Depth Review of Situation in LAC.

The tensions at the borders between India and China have been escalating and is making the headlines since the past few days now. Following the tension, Wangchuk said what, we, as citizens, can do at this time. He appeals to all the Indian citizens and the NRIs to boycott the Chinese products. His video titled, “CHINA KO JAWAAB,” begins with discussing the tension happening between the countries. The innovator added, that he was giving up his Chinese-made phone within a week and continued to explain why. Wangchuk’s video was set in Ladakh, with the Himalayas and river Sindhu, in the backdrop and it has been widely shared on social media.

“Tension is rising... thousands of soldiers are beig deployed. Normally, when there is border tension, we sleep at night thinking soldiers will respond to it. But today I want to say, there should be a citizen response too. Citizens like you in Delhi, Mumbai, Bengaluru...” he continues speaking in the video, as translated in reports.

Meanwhile, External Affairs Ministry Spokesperson Anurag Srivastava reported that they are engaged with China to resolve the border issue. The UN also called for maintaining calm along the India-China border. On the other hand, India continues to battle against the coronavirus, which infected more than 1.6 lakh people across the country.

(The above story first appeared on LatestLY on May 29, 2020 07:15 PM IST. For more news and updates on politics, world, sports, entertainment and lifestyle, log on to our website latestly.com).