The video which was taken at the right moment shows the whales one by one showing off the stunts. 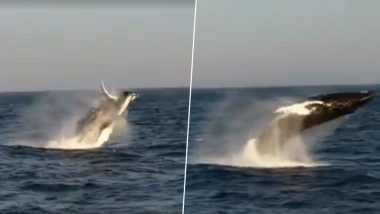 In a rare sight, a group of tourists were lucky enough to see three whales breaching the waters off the Canadian coast. The three humpback whales soared to the sky of Nova Scotia and splashed back making it a memory of a lifetime for the tourists. The tourists were with on a whale sightseeing trip with Ocean Explorations Zodiac Whale Cruises when they saw the beautiful sea creatures playing in its habitat. Dead Baby Blue Whale Washes Ashore on Kamakura Beach in Japan

The video which was taken at the right moment shows the whales one by one showing off the stunts. As the whales prepared an excited guide who know what's coming by can be heard telling the tourists, "Get ready, it's going to be a triple breach!" Then all the three whales swim ahead making the tourists scream in excitement. The passengers can be heard squealing in delight as the rare triple show unfolds before them. ‘Rare’ Blue Whale Caught and Killed by Icelandic Whaling Company

Sharing the video on Facebook, the whale group's post reads, "The whales surfaced after a dive and swam and/or drifted over to us. One 'interacted' with us before joining the other two 'logging' for many minutes before the 'take off'. We did not (ever) approach the whales or 'wake them up'."

Days after this video went viral, Dolphin Fleet Whale Watch shared a video showing a triple breach again to the surprise of tourists. This video has received over 5,39,000 views and more than 3,600 likes. It continues to be shared by animal lovers across and already has 10,000 shares.

(The above story first appeared on LatestLY on Sep 17, 2018 04:18 PM IST. For more news and updates on politics, world, sports, entertainment and lifestyle, log on to our website latestly.com).