Gay Man from UK Who Infected Lovers with HIV, Jailed for Life!

Daryll Rowe, a 26-year-old hairdresser from Brighton UK, infected 10 men with HIV by lying to them and tampering with the condoms. 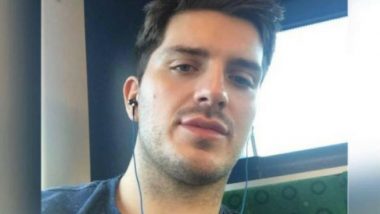 A gay man from Brighton, UK who was accused of preying on men from Grindr and deliberately infecting them with HIV was sentenced to life on Wednesday, April 18, 2018. Daryll Rowe, a 26-year-old hairdresser sought out men on the gay dating app, solely with the malicious intent of spreading the infection. In doing so, he became the first man in the country to be accused of intentionally spreading HIV. Rowe was convicted of 10 charges, which included five counts of causing grievous bodily harm with intent and five of attempting.

The hairdresser was diagnosed with HIV in 2015 in Edinburgh. And between October and February 2016, Rowe met many men on Grindr and had sex with eight of them. When the police was on to him, he went on the run and infected two more men, bringing his count to 10. Shocking details of Rowe’s devious crime emerged during the six-week trial. According to the doctors who were treating him, the 26-year-old refused treatment and ignored medical advice and then embarked on a vindictive plan to infect other gay men.

As per the accounts of the victims, Rowe used aliases and insisted on having unprotected sex with these men, claiming he was clean. He would even tamper with the condoms to ensure that he infected his sexual partner. Afterwards, he would reveal to them about his HIV status and had even informed a lover over text. The hairdresser explained to the jurors that he thought he was cured for the virus after treating himself with naturalistic remedies for HIV such as coconut oil, oregano and olive leaf oils. He even admitted to drinking his own urine as a treatment method for HIV.

Calling him a menace to the society, one of Rowe’s victims lauded the verdict, saying: “As long as he has strength in his body, he will be a risk.” One of his 10 victims lost both his parents due to AIDS when he was a child and had done everything in his capacity to keep himself safe from the deadly disease. One of the infected individuals even turned suicidal when the medical report came out.

The judge who sentenced him said: “Many of those men were young men in their 20s at the time they had the misfortune to meet you. Given the facts of this case and your permissive, predatory behaviour, I cannot see when you would no longer be a danger to gay men. In my judgment, the offences, taken together, are so serious that a life sentence is justified.”

Sadly for the 10 men who were infected, will have to take life-long precautions to ensure that the HIV positive status won’t become full blown AIDS. Rowe, on the other hand, appeared stoic in the court. His face didn’t betray any emotion and was seemingly remorseless when the verdict was announced at the Brighton Crown Court.

(The above story first appeared on LatestLY on Apr 20, 2018 10:42 AM IST. For more news and updates on politics, world, sports, entertainment and lifestyle, log on to our website latestly.com).