UK Man Accidentally Burns Down His Flat While Proposing to Girlfriend, 5 Other Times When Wedding Proposals Failed Miserably (Watch Videos) 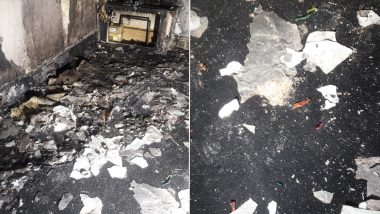 Nothing can be more hurtful when something you planned for so long fails. Most of us, at some point in life, before getting engaged, likely imagined what our perfect proposals would look like. Whether it involved a romantic candlelight evening at home or something big at a sporting event, you probably had at least some idea of how you wanted the moment to go down. But what happens when it goes wrong? A UK man’s romantic proposal plans were snuffed out after he accidentally burns his flat. Uh-oh! He lights hundreds of tea-light candles and left the flat to pick up his girlfriend from work to deliver those magical words. But instead, his entire flat was burned down. In a series of tweets, the South Yorkshire Fire and Rescue explained the chain of events that led to the fiery proposal. If you thought this is one episode of wedding proposals gone wrong, brace yourselves for five other times when proposals failed miserably.

The UK man is not identified. He set the scene for his proposal with balloons and a bottle of wine, before lighting masses of candles. The man left the flat, with the candles still burning, hoping the scene would be ready for the ‘big moment,’ once he enters with his girlfriend. But the flat was engulfed in flames. Fortunately, nobody was reported injured. And she said, YES! World's Most Unique Wedding Proposal? Japanese Man Travels 6 Months to Spell 'Marry Me' on Google Earth, Watch Viral Video.

Want to know what happened here? We thought you did. It involves a romantic proposal that didn't quite go to plan, and includes an important lesson around candle use.

Fortunately our firefighters dealt with the fire quickly and nobody was injured.

However, there is a really important lesson here...

If you thought, this is one in a million case, look at these wedding proposals that went so terribly wrong. For these couples, let us just say that the reality did not exactly live up to exactly what they planned for. Engagement Ring Lost in Vagina! Proposal Gone Wrong as Kinder Egg with Ring Stuck Inside Woman’s Privates.

Most of the times, you might think that the best idea to surprise the person you are proposing to is by making them think you are dumping them, before you pop the question. Well, in this case, it is better, to rethink!

This could be every guy’s worst proposal nightmare. This girl said no, in front of an entire crowd of basketball fans and left.

In front of the whole crowd, the guy so planned well to make the day extra special. The girl just ran away mid-proposal, while the boyfriend stood there, clueless of what just happened.

This man learned the hard way that proposing in front of a waterfall is romantic, but it may not be the best idea. His ring fell into the water and never found.

Oh no! Please never try to tie an engagement ring to a balloon. Or at least be sure, you are holding on tightly. The balloon and the ring can be seen flying high in the sky.

While the above wedding proposal ideas were unique and romantic, it is important to keep two things in mind, at least—be sure your partner is ready for marriage and things that seem romantic in theory may not be same in practice.

(The above story first appeared on LatestLY on Aug 05, 2020 09:25 PM IST. For more news and updates on politics, world, sports, entertainment and lifestyle, log on to our website latestly.com).