The incident caught on CCTV shows how the driver dramatically rescued the baby. 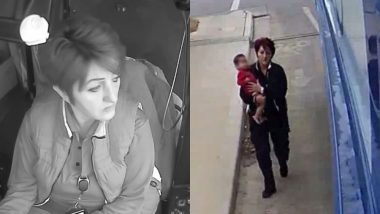 Video of an MCTS driver saving the life of a baby wandering on the street has gone viral on social media. The incident caught on CCTV shows a dramatic rescue by a driver while on duty. In the footage, the baby can be seen running down the street when Irena Ivic who works with the Milwaukee County Transit System spotted him.

Irena immediately stopped the bus and ran to the child who was running barefoot down the pavement. In the cold weather outside, the boy was wearing just a onesie and a diaper. Irena ran to the child, held him and rushed back to her bus. She alerted the police and as she waited for them to arrive, a passenger removed her jacket and gave it to the child to keep him warm. Irena can be kissing the boy's forehold while cradling him in her arm. Child Cheats Death in Bengaluru: Accident Video of Riderless-Bike Travelling 300 Metres With Kid Goes Viral.

This is not the first time, a bus driver saved lost children and helped them get back to their parents. According to MCTS, this is the ninth such case in recent years where their drivers spotted lost children and alerted the cops. The boy was thereafter reunited with his father, the police said. The boy or his parents' identities have not been released yet by authorities.

According to the cops, the child was left outside by his mother who is suffering from some mental health issues. Irena was awarded by MCTS for her selfless work. The incident happened in December 2018. Milwaukee bus drivers have multiple time in the past grabbed headlines for being alert drivers and helping the community. Video of a driver helping a blind man crossing the street had also gone viral earlier.

(The above story first appeared on LatestLY on Jan 12, 2019 02:31 PM IST. For more news and updates on politics, world, sports, entertainment and lifestyle, log on to our website latestly.com).