A scene from Netflix hit, Ginny & Georgia is going viral on social media. Whether you have watched the show or not, the particular clip tickles the funny bones of netizens and even reminds some about the mythical vagina dentata. You will have to watch the viral video to know how and why! 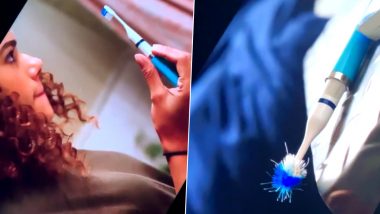 So, before Ginny puts the electronic toothbrush inside her vagina, the bristles seemed fine, just as new. But after a quick use, the strands lost all the stiffness, and the brush head was torn out. This is what making people go, “Whaaat????” Some even hilariously compared it to the mythical vagina dentata—a folk tale about the toothed vagina that exists in virtually every culture.

her looking at the toothbrush: pic.twitter.com/mvRk9k5hVO

now why would they- you know what nevermind I cant pic.twitter.com/sGvf58s8Wa

Once You See It, You Just Can't

Isn’t it funny? While the scene could be significant for the show, netizens found their way to LOL! Keeping the jokes aside, it was unhygienic and not safe. Putting an electric toothbrush inside yourself, and turning it on, you might scratch and inflame your tissues. Besides, if it’s a used toothbrush, you are opening yourself to even more irritation and bacteria.

(The above story first appeared on LatestLY on Feb 28, 2021 05:00 PM IST. For more news and updates on politics, world, sports, entertainment and lifestyle, log on to our website latestly.com).