A snake was removed by snake catchers from a man’s shirt who reportedly was sleeping at a hospital in Maharashtra, India. The rescue mission was captured in camera and now been surfaced on social media platforms, giving the scary chills to the netizens. 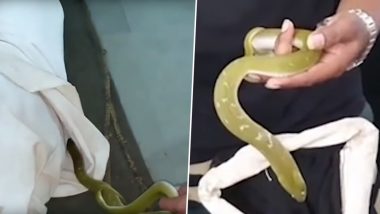 Why do snake-related incidents always have to be this scary? Sometimes, the reptiles are discovered slithering beneath your furniture, while in other encounters, people have reportedly woke up to one hissing right next to them. In yet another incident, a venomous snake was removed by snake catchers from a man’s shirt who reportedly was sleeping at a hospital in Maharashtra, India. The rescue mission was captured on camera and has now surfaced on social media platforms, giving netizens the chills. Ssscary Kiss! Brisbane Woman Wakes up To Find a Python Hissing Right Next to Her.

The unidentified man, reportedly, visited Maharashtra Ahmednagar district hospital, to visit someone, who was in the intensive care unit. It was the hospital staff who saw the green vine snake slithering into the man’s shirt, who was sleeping on a bench. They immediately called the snake catchers. After their arrival, the staff did not want to wake up the man, as it might alarm the snake. So, taking gradual steps, snake catcher, Akash Jadhav, removed the reptile, without waking the man up. Python Slithers into Indian-Style Commode; Mumbai Resident Faints After Spotting It.

Watch Viral Video of Snake Being Removed from Man's Shirt

Jadhav reported that the snake had the potential to hurt the sleeping man as it was poisonous. After the successful rescue mission, the man was informed by the officials about the snake in his shirt. The viral video has given chills to social media users.

(The above story first appeared on LatestLY on Jun 25, 2019 09:36 AM IST. For more news and updates on politics, world, sports, entertainment and lifestyle, log on to our website latestly.com).