Video of Frog 'As Big as Human Baby' Goes Viral After Villagers Find It in the Solomon Islands! Know More About the Rare Cornufer Guppyi Frogs That Can Weigh Upto 1kg

Have you ever heard of a frog "as big as a human baby"? Well, the idea of it may seem scary, but a type of frog does exist that is too big to believe when compared to regular frogs. 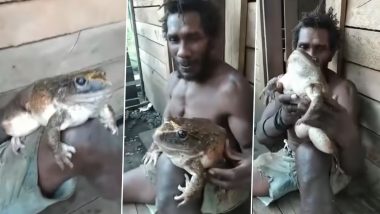 Have you ever heard of a frog "as big as a human baby"? Well, the idea of it may seem scary, but a type of frog does exist that is too big to believe when compared to regular frogs. Amongst so many types of animals that are found in the world, there are some that come as a surprise to people. Pictures and videos of a frog are going viral on social media. Its size can almost be compared to a baby of a human being. The frog was found wandering in the Solomon Islands. However, this frog in question is no longer alive after Timber mill owner Jimmy Hugo, 35, found it while he was hunting for wild pigs on the outskirts of Honiara, Solomon Islands. The enormous amphibian is called Cornufer Guppyi frogs.

Jimmy said to Daily Mail: "I couldn't believe what I was seeing. It is the biggest frog I have ever seen in my life. It was the same size as a human baby. We call them 'bush chicken' because some villages seem to like them more than chicken, but they're difficult to catch." Huge Bhola Fish of 52 Kgs Found in West Bengal, Woman Hits a Jackpot Selling it For 3 Lakhs! (View Pics).

He further said: "We did end up eating this one as it had already died but hopefully the next time we see one it will still be alive and we'll keep it that way."

The Cornufer guppyi is considered the largest frog species in the world. It is a species of frog in the family Ceratobatrachidae. Their number is decreasing rapidly. Since these frogs have very sensitive skin and due to increasing water contamination, their number has decreased. Humans mostly use this frog for food purposes due to the excessive meat found in them.

Video of Frog 'As Big as Human Baby' Goes Viral:

Everyone was surprised to see this monster frog. Seeing the humans, the frog hid in the nearby bushes. After this, the villagers started looking for him. When this frog was caught, he died shortly after. The villagers took pictures of it and then cooked it. The villagers hope that there will be more appearances from such monster frogs and they will try to save them. Footage shows the amphibian - a Cornufer guppyi frog was found in the nearby bush in April.

(The above story first appeared on LatestLY on May 11, 2021 09:02 AM IST. For more news and updates on politics, world, sports, entertainment and lifestyle, log on to our website latestly.com).