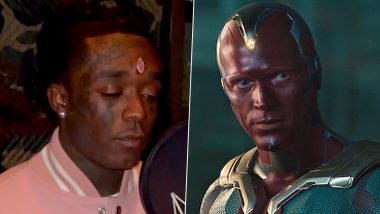 Lil Uzi Vert is driving the internet crazy, especially Marvel fans across the globe with his latest bizarre move. The American rapper surgically implanted a large pink diamond on his forehead, reportedly worth $24 million. His looks, obviously remind people of Vision from the Marvel movies. In no time, Vert’s latest look has gone viral sparking funny memes and jokes on social media. “Humans are odd,”—remember this dialogue? The hilarious reactions compare the 26-year-old’s unique look to MCU superhero and his mind stone—one of the six infinity stones. Whether you like the look or not, the viral memes will surely crack you up, and Vision comes to mind, every time you see the rapper.

Internet is one place filled with users who aren’t afraid to let you know how they feel about something—for better or worse. Among these are the Marvel fans, who have definitely proven to be vocal about specific topics—be it US space force members named as ‘Guardians of the Galaxy,’ or the latest piercing choice of Vert. It won’t be wrong assuming that these people too are a fan of Marvel!

The American rapper who already has facial tattoos and piercings recently revealed his latest look. A pink diamond which he had placed in the centre of his forehead. As the pictures of the 26-year-old and his pierced diamond went viral on Twitter, marvel fans could not help but notice just how similar he looks to the MCU’s Vision. Some also had the perfect response when predicting Thanos’ reaction to Lil Uzi’s jewellery.

A post shared by Marni Life( NO STYLIST)1600 (@liluzivert)

Stay Away From Thanos!

Teacher: where do we keep diamonds

Me: In a safe box

Teacher: so why did you write Lil Uzi Vert's head pic.twitter.com/shRWOFqxEi

Others Compare His Look to Morty!

Aren’t the memes hilarious? With WandaVision running on Disney+, some fans were surprised to see Vision trending for a reason not related to the show. Whether you like or dislike the rapper’s new piece of jewellery, we all can agree that it is an ‘interesting’ fashion statement.

(The above story first appeared on LatestLY on Feb 04, 2021 04:59 PM IST. For more news and updates on politics, world, sports, entertainment and lifestyle, log on to our website latestly.com).