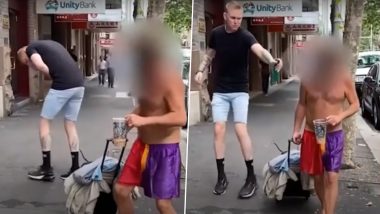 ‘Sneezing’ as a part of a prank? We are in the middle of a pandemic that has caused chaos across countries. People continue to battle with the virus, with researchers ongoing struggle to know more about COVID-19 infecting millions across the globe. Amid the global health crisis, a YouTuber came under hotbed after a video of him ‘sneezing’ as part of a tone-deaf prank went viral on the internet. Even though the original clip was deleted, it was re-uploaded and shared on social media platforms, with netizens slamming the YouTuber. Turns out it was Luke Erwin—the Aussie social media sensation who carries a record of past controversies and also dated XXX OnlyFans star, Vanessa Sierra.

Who is Luke Erwin?

What is Erwin’s Viral Prank Video?

Following social media outrage, Erwin removed the video, before it surfaced on social media platforms. The now-deleted clip shows Erwin walking towards a shirtless man armed with a green spray bottle. As he gets closer, he sprays the man across his bareback while pretending to sneeze at him. When the man turns around, the YouTuber continues to clutch at his nose, holding the spray bottle with another hand. The homeless man appears to remain unaware of the prank, but viewers were quick to react. They slammed the YouTuber for being ‘tone-deaf’ and exploiting a vulnerable person for cheap laughs. Some further accused him of lacking empathy towards other humans. Who Is David Dobrik? Here’s What You Should Know About the YouTuber Whose Vlog Squad’s Ex-member Is Accused of Rape.

This is not Erwin’s ‘sneezing on the public prank.’ He has a history of similar pranks as his YouTube channel is filled with controversial videos. On his YT channel, there are several instances of his sickening prank—once for April Fool’s 2017, another in 2019, among many other prank videos.

In 2019, Erwin filmed himself using an air horn to frighten unsuspecting pedestrians in Sydney. According to local reports, Erwin and his brother Joel, who was also part of the prank was charged with assault after one of their victims complained to the police of a damaged eardrum. It doesn’t end here! Just early this year, the Aussie YouTuber faced serious backlash after he handed out free beer to attendees to a Brisbane Invasion Day event.

In the name of ‘prank,’ Erwin over the years has garnered a lot of criticism. The latest prank video was unwelcomed by netizens, who slammed the YouTuber for exploiting a homeless man to get cheap laughs.

(The above story first appeared on LatestLY on May 13, 2021 07:51 PM IST. For more news and updates on politics, world, sports, entertainment and lifestyle, log on to our website latestly.com).