Why #ForgetCondoms? THIS Is the Reason Durex India Was Asking People to Forget Condoms

With the latest hashtag #ForgetCondoms, the brand was trying to sell something, and safe sex is still its priority. So, why #ForgetCondoms? In this article, we will bring you the reason as to why the sexual well-being brand Durex has been asking people to forget condoms on social media. 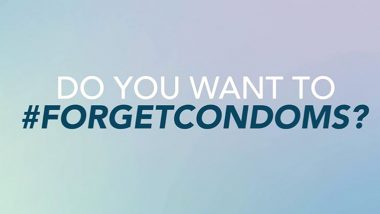 From the past few days, #ForgetCondoms was running as one of the top trends on Twitter. Do you remember? The hashtag went viral after condom brand company Durex India launched its campaign on Instagram, asking users if they should forget condoms so that couples can enjoy unforgettable sex. People were scratching their heads as to why such thought could have even occurred to the brand. No safe sex can lead to a lot of consequences. But don’t worry, with the latest hashtag #ForgetCondoms, the brand was instead trying to sell something, and safe sex is still a priority. So, why #ForgetCondoms? In this article, we will bring you the reason as to why the sexual well-being brand Durex has been asking people to forget condoms on social media.

Durex India conducted a global sex survey in 2017, according to which, the number one reason why people avoid using condoms is reduced enjoyment. Hence, the brand launched the campaign #ForgetCondoms, and it created quite an engagement on social media. People were left confused. They even began to share funny memes and jokes with #ForgetCondoms on Twitter. The brand initiated, “I want to #ForgetCondoms because” and users were asked to finish the sentence. They received numerous responses with people explaining why they want to forget condoms.

Should anything come between you and unforgettable sex! Should we #ForgetCondoms?

Durex India came up with the solution for its audience. It has launched India’s thinnest condoms called “Durex invisible condoms.” The company talks about the product using an indirect metaphor in its ad. Everyone around them disappears, one after another. The couple drops their cloth, and all that remains, in the end, is their pleasure.

This is the Reason Why Durex Was Asking People to #ForgetCondoms

The wait is finally over! Introducing the revolutionary #DurexInvisible Condoms. Now nothing comes between you and unforgettable sex with India's Thinnest condom. 🙌 To buy, click the link in the bio.

What sounded like a mistake initially, proved to be a great marketing strategy to announce a product. The brand even boarded social media influencers and actors like Radhika Apte, Kalki Koechlin and many more to talk about its #ForgetCondoms initiative.

(The above story first appeared on LatestLY on Oct 20, 2020 12:43 PM IST. For more news and updates on politics, world, sports, entertainment and lifestyle, log on to our website latestly.com).