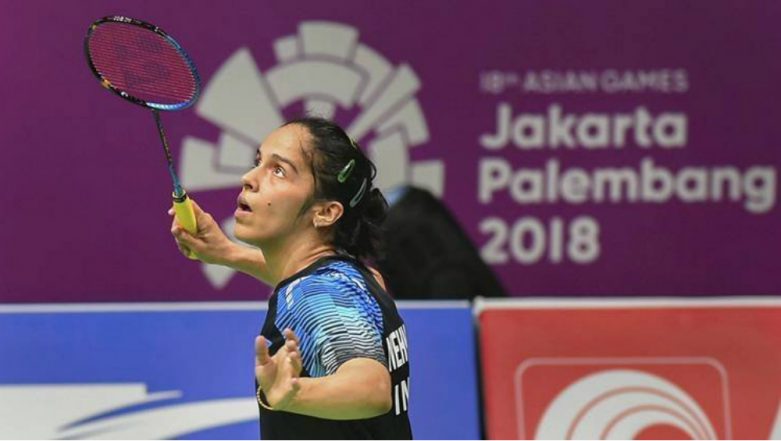 Jakarta, August 27: Ace India shuttler Saina Nehwal had to settle for the bronze after suffering a straight games defeat in her women's single semi-final clash at the 2018 Asian Games here on Monday. The 28-year-old Indian lost 17-21, 14-21 to World No.1 Tai Tzu Ying of Taiwan. Saina's bronze is the first individual badminton medal at the Asiad for India in 36 years. Catch Asian Games 2018 Live News Updates Day 9 Here.

In a close fought match, Saina trailed 0-3 in the first game before making a comeback to draw at 10-10. However, her opponent took five consecutive points to take a 15-10 lead. Putting up a good fight yet again, Saina reduced the deficit to 15-16 but the Taiwan shuttler denied the Indian any further onslaught as she wrapped up the 19-minute affair 21-17. Asian Games Medal Tally 2018 Updated: Check India's Medal Tally in Current Table and Country-Wise Medal Standings.

In the second game, Tai once again raced to a 4-1 lead and some unforced errors from Saina helped her to increase her lead to 6-2. Saina again fought back to level the scores at 6-6 and went into the break trailing 10-11. The issue went 15-14 in Tai's favour before the Taiwanese once again dominated the final few moments to seal the game 21-14 in her favour.