The Thomas Cup 2022 final between India and Indonesia will be held at the Impact Arena in Bangkok, Thailand. The final will be held on May 15 (Sunday) at starts at 11:30 AM IST. 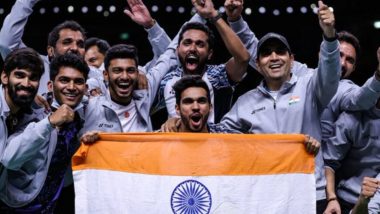 The injury to singles player H.S Prannoy will be a matter of concern as India gear up to take on 14-time champions Indonesia in a maiden, historic final in the Thomas Cup team badminton championship. India had defeated Malaysia and Denmark by identical 3-2 margins in the quarterfinals and semifinals to storm into the final for the first time in the history of the tournament. Prannoy played a crucial role in both those rubbers. Prannoy, who had suffered a nasty slip in the match deciding encounter with Rasmus Gemke after India had fought back to level the rubber 2-2. Meanwhile, for India vs Indonesia Thomas Cup 2022 final live streaming online and live TV telecast. Thomas Cup 2022: Chirag Shetty Pumped Up for Final Clash, Urges Indian Community in Thailand To ‘Witness History Unfold’.

In Sunday's final, India take on Indonesia, who edged out China 3-2 in the other semifinal. If the Indians win the title, it will truly be a historic moment for the sport of badminton as India will become only the sixth country ever to win the Thomas Cup title. Only Indonesia, China, Malaysia, Denmark and Japan have won the title in the prestigious event since its format was changed and China started participating in 1982. But India face a tough ask against Indonesia, the most successful country in Thomas Cup history with 14 titles. The current Indonesia team is quite strong and they proved their mettle by prevailing over China in the semis.

The Thomas Cup 2022 final between India and Indonesia will be held at the Impact Arena in Bangkok, Thailand. The final will be held on May 15 (Sunday) at starts at 11:30 AM IST.

Fans in India can catch the live action of the Thomas Cup 2022 final between India and Indonesia on newly launched Sports18 1/HD.

Where to Get Free Live Streaming Online of Thomas Cup 2022 Final, India vs Indonesia Badminton Match?

Fans can also watchThomas Cup 2022 final between India and Indonesia match online. The live streaming online will be available on Voot and also on the official YouTube channel of BWF.

(The above story first appeared on LatestLY on May 15, 2022 08:51 AM IST. For more news and updates on politics, world, sports, entertainment and lifestyle, log on to our website latestly.com).