Placed third on the table with one draw and a heavy defeat, India stare at an exit from the competition. They not only need to defeat Indonesia in their last pool game but also would want Japan to defeat Pakistan, to keep themselves alive in the tournamrent. 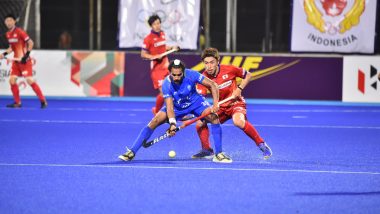 With no wins in two games, defending champions India face the threat of getting knocked out of the Asia Cup Hockey 2022 competition as they face hosts Indonesia in their third pool match on Thursday, May 26. The match would be played at the GBK Sports Complex Hockey Stadium in Jakarta and is scheduled to begin at 5:00 pm IST (Indian Standard Time). India began with a 1-1 draw against Pakistan--a game they should have won given the number of chances they had. In their second game, they were thrashed 5-2 by Japan. India Suffer 2–5 Defeat to Japan in Second Game at Asia Cup Hockey 2022

A win would not be good enough for India to make it to the knockout rounds. In order for them to advance, India also need Japan to beat Pakistan in the other game.

The India vs Indonesia, Men's Asia Cup 2022 Hockey match is scheduled to take place on May 26 2022 (Thursday) at 05:00 pm IST. The game will be held at the GBK Sports Complex Hockey Stadium in Jakarta.

If you are not able to tune in to television for whatever reasons, you can also catch the IND vs IDN hockey match with live streaming online. Disney+ Hotstar, the official streaming platform of Star Sports, will provide the live-action of Men's Asia Cup 2022 on its website and its mobile application.

(The above story first appeared on LatestLY on May 26, 2022 12:59 PM IST. For more news and updates on politics, world, sports, entertainment and lifestyle, log on to our website latestly.com).