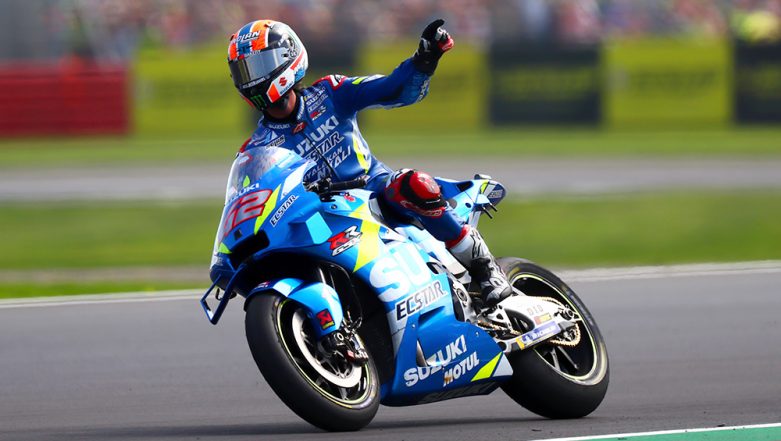 Silverstone (England), August 26: In a podium dominated by Spaniards, Alex Rins of Suzuki earned his season's second victory at the British motorcycle Grand Prix (GP) in a stellar finish, prevailing over Repsol Honda rider Marc Marquez and Yamaha's Maverick Viñales. Rins knew how to wait for the right moment to get past Marquez when he had least expected it. Hungarian Grand Prix 2019: Lewis Hamilton Beats Max Verstappen to Register His Eighth Victory of the Season.

The Honda racer knew how to close all the doors on his rival but he relinquished the penultimate lap to prepare for the last one, Efe news reported. Rins seized the opportunity and got past Marquez by 0.013 seconds on Sunday.  Lewis Hamilton Fastest in Practice for Hungarian Grand Prix

"Unbelievable! I do not have words to explain," Rins said when asked about his feelings to have won the British GP."I was so close to do a big mistake because two laps to the end, I was thinking it was the last lap. I was keeping the calm. I knew he was faster on that part of the sector but the last corner for me was unbelievable. I was much faster than him," he added.

Meanwhile, Marquez did not seem to be satisfied with the result."Happy about the championship, but the race no. I knew Rins had a big chance. I keep pushing because my target was not the race, was the championship to take a lot of points," Marquez said.