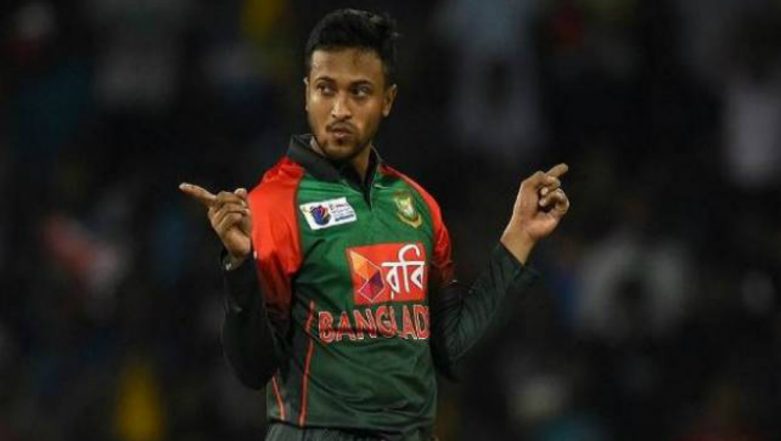 Shakib Al Hasan made a come back in the Bangladesh cricket team in the ongoing tri-series in Ireland featuring the home team and West Indies. Ahead of ICC Cricket World Cup, 2019 the Bangladeshi all-rounder has expressed his desire to bat at no 3 in ODIs. Bangladesh Team for ICC World Cup 2019: Bangladesh Cricket Announces 15-Man Squad, Shakib Al Hasan Makes a Return, Mashrafe Mortaza to Lead the Side.

Shakib Al Hasan missed out the ODI series against New Zealand this year due to an injury. Bangladesh played West Indies in the match no 2 of Ireland Tri-Nation Series, 2019 which Bangladesh won by 8 wickets and 30 balls to spare. Windies batted first to put on a total of 261/9 in 50 overs which Bangladeshi side chased down with ease by just losing 2 wickets. Tamim Iqbal and Soumya Sarkar played brilliant knocks of 80 and 73 runs respectively. Shakib came at no 3 in this match where he played a fine knock of 61 from 61 balls and had a good partnership with Mushfiqur Rahim. Team Sunrisers Hyderabad Celebrates Shakib Al Hasan’s Birthday; Paint the All-Rounder’s Face With Cake (Watch Video).

"For me, I think, the earlier I bat the better" – Bangladesh all-rounder @Sah75official wants to make the No.3 spot his ahead of #CWC19. https://t.co/Akb2rZhe8z

The 32 years old all-rounder has batted at no 3 in 13 ODIs where he had scored 492 runs at an average of 41, which is higher than his career average of 35.45. As per the reports of Cricket World Cup official website, Shakib has expressed his desire to bat at one down position to the coach and the captain, however, the Bangladeshi cricketer also added that he has no problem batting at any position where his team wants him to bat.

Bangladesh will play Pakistan and India in the warm-up games of ICC Cricket World Cup 2019 and will play their first official match of World Cup 2019 tournament against South Africa on June 2, 2019, at the Oval.