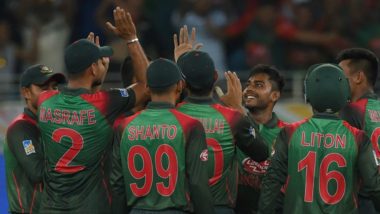 Bangladesh went through a torrid run at the start of this year in New Zealand where they lost to the Kiwis 3-0. Bangla players disappointed with their fans with their performance at New Zealand. Although Shakib Al Hasan was not present in the tournament due to an injury, then to we expect Bangladesh Cricket team to provide a class performance. Bangladesh Cricket selectors have given an opportunity to newbie Abu Jayed Rahi to play for his team in the upcoming World Cup.

BREAKING: Bangladesh have named their 15-man squad for #CWC19! pic.twitter.com/o5qnwWdh7S

Bangladesh will begin their ICC World Cup 2019 campaign from June 5, 2019, where they will play New Zealand at The Oval, London in a day-night game. Bangladesh will play all the other eight teams, and the top four teams will progress to a knockout stage of semi-finals and a final.

(The above story first appeared on LatestLY on Apr 16, 2019 01:06 PM IST. For more news and updates on politics, world, sports, entertainment and lifestyle, log on to our website latestly.com).