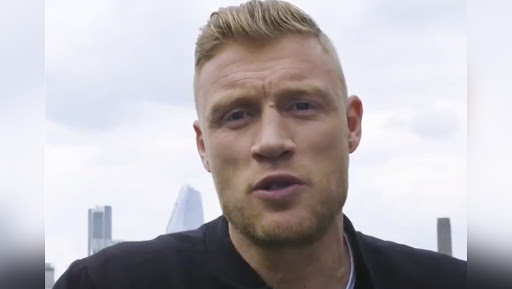 London, April 10: Former England all-rounder Andrew Flintoff has been known to get into the skin of opposition players and that has also seen his team suffer like when he exchanged verbal volleys with Yuvraj Singh and saw Stuart Broad pay the price as the Indian batsman hit six sixes off the pacer in the 2007 WT20 game. Flintoff has now recalled a game where he engaged in a duel with Shoaib Akhtar only to see his stumps go for a walk in the park.

Speaking to Talk Sport, Flintoff recalled an episode from a 2005 Test match against Pakistan wherein Akhtar kept calling Flintoff fat and the burly all-rounder gave it back to the speedster, but the end result wasn't too sweet for the Englishman. Ramiz Raja Accuses Shoaib Malik's Manager For Misusing His Twitter Credentials? Former Pakistani Cricketer Deletes Tweet After Realising his Folly.

"Listen to this, I got feelings. He (Shoaib) kept having a go at me. He kept calling me ‘fat'. Fat this, fat that. I am not having this, I am thinking I am going to nip this in the b***. So, as I walked in, I said, Shoaib, it's all right, you look like Tarzan, but you bowl like Jane," Flintoff said.

"It haunted me straight away. I walked out to bat, I think 1st or 2nd ball, my off-stump was cart-wheeling back as he knocked it over. Then, as I walked off, he gave me a big ‘OOOHHHH'."

Former and current cricketers have been interacting with fans on social media these days as the world has come to a standstill due to the coronavirus outbreak and Akhtar took to his YouTube channel to suggest a series between India and Pakistan to raise funds to fight the pandemic.

"I want India and Pakistan to play a series. I want it to happen without crowds, just broadcasting unit should be there and the matches should be televised, three ODIs or T20Is should be played. I cannot understand why this is a bad idea," Akhtar said in a video posted on his YouTube channel. Shoaib Akhtar Proposes India vs Pakistan ODI Series Amid Coronavirus Pandemic, Twitter Comes Up With Hilarious Memes.

"Players can play after undergoing testing, if the series happens, just think how many people will watch the matches on television, think about the funds the series can generate. For the first time, there will be no loser, there is everything to gain, imagine Indian team winning the match, and the funds going to Pakistan as well and vis-a-vis," the Rawalpindi Express said.