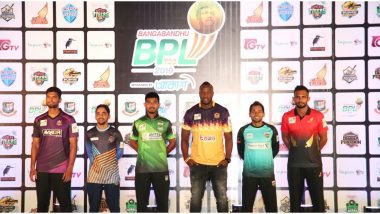 So there is no change in the BPL 2019-20 points table as Chattogram Challengers is placed on number one of the Bangladesh Premier League 2019-20 points table with 12 points in their kitty. Chittagong Vikings had won their match against Dhaka Platoon and won the game against them by six wickets. The team has won six games out of eight and faced a couple of losses. Whereas, Khulna Tigers are on number two with 10 points. The team has so far played seven matches and have won five games. Check out the updated points table.

A total of 42 matches will be played in BPL 2019-20 with Dhaka, Sylhet and Chittagong will be hosting the matches. Dhaka will host 24 games, while Sylhet and Chittagong will be hosting 6 and 12 matches respectively. Top four teams will then qualify for the play-offs with the third and fourth best-placed teams playing the eliminator. Top two teams will get the opportunity to reach the final. The final of BPL 2019-20 will be played on January 17, 2020.

The player’s draft was held on November 17, 2019, in which the squads of all eight teams were confirmed. Andre Russell is the star attraction of BPL 2019-20 and has also been named the captain of Rajashi Royals. The other captains are Mahmudullah (Chattogram Challengers), Dasun Shanaka (Cumilla Warriors), Mashrafe Mortaza (Dhaka Platoon), Mushfiqur Rahim (Khulna Tigers), Mohammad Nabi (Rangpur Rangers) and Mosaddek Hossain (Sylhet Thunder). Comilla Victorians, now called the Cumilla Warriors, are the defending BPL champions, while Dhaka Dynamites are the most successful team of BPL with three titles, including two successive in the first two seasons. Dhaka Gladiators and Rangpur Riders are the other teams to have won the tournament.

Season 7 of the BPL was initially supposed to start from December 06, 2019, but was delayed by five days and kick-started on December 11. This season, however, BCB President Nazmul Hasan Papon informed that the tournament will be run by the country’s cricket board itself without any franchise following a dispute in contract and conflict of interest issues between BPL Governing Council and other franchises. The league was reduced from an eight-team T20 league to a seven-team tournament. The name of the league has also been changed to Bangabandhu Bangladesh Premier League from 2019-20 to mark the occasion of 100th birth anniversary of Father of Nation (Bangladesh).

(The above story first appeared on LatestLY on Dec 11, 2019 02:16 PM IST. For more news and updates on politics, world, sports, entertainment and lifestyle, log on to our website latestly.com).