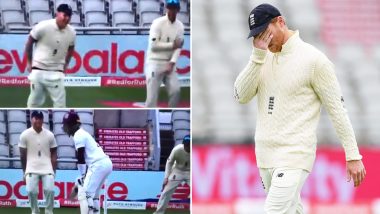 Ben Stokes was left embarrassed after an unfortunate ‘brown stain’ appeared on his trousers on day two of the England vs West Indies third Test match in Manchester. The maverick all-rounder initially tried to hide it with his sweater but was caught by captain Joe Root, who immediately broke into a giggle after spotting the mark on Stokes’ pant. Left embarrassed after being caught, Stokes then let out a sheepish smile. But unfortunately, the incident was also recorded on television and former England cricketer and prominent commentator David Lloyd was heard telling on commentary, “It appears there has been an occurrence for Ben Stokes on his trousers.” England vs West Indies Live Score Updates of 3rd Test 2020 Day 3.

Stokes, however, later clarified that what was initially thought to be stomach mishap was actually a coffee stain. The England vice-captain quoted a BBC Test Match Special video to clarify that he has mistakenly sat in split coffee, which left the stain on his pant. “Sat in spilt coffee FYI,” wrote Stokes.

Had he actually suffered the stomach mishap, Stokes would have been the second after Australian captain Tim Paine who admitted to soiling his pants during last year’s Ashes tour at the same ground. Linker too had undergone a similar accident during the World Cup.

Meanwhile, England find themselves in a strong position at the end of day 2 of the third Test with West Indies struggling at 137/6. Captain Jason Holder and Shane Dowrich was at the crease when stumps was called due to bad light on day 2. West Indies were still 232 runs behind England’s first-innings score of 369.

(The above story first appeared on LatestLY on Jul 26, 2020 04:52 PM IST. For more news and updates on politics, world, sports, entertainment and lifestyle, log on to our website latestly.com).