Social media got flooded with tributes as Indians remembered Bhagat Singh’s sacrifice on his anniversary. Many cricket stars also joined the bandwagon and shared heartfelt posts. CSK batsman Suresh Raina hailed the revolutionary’s patriotism and bravery while Harbhajan Singh wished his fellow countrymen on the occasion. 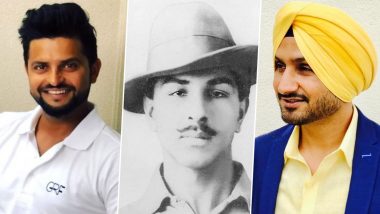 On the occasion of Bhagat Singh’s 113th birth anniversary, Suresh Raina, Shikhar Dhawan, Harbhajan Singh and many other prominent members of cricket fraternity paid tribute to the late freedom fighter. Bhagat Singh was one of the most loved freedom fighters involved in India’s struggle for independence. At the tender age of 23, he laid down his life for the freedom of nation along with his associates Rajguru and Sukhdev. Bhagat Singh was one of the fearless socialist revolutionaries who wasn’t afraid to put his thoughts and opinion. Along with being brave, Bhagat Singh was aware of the political situations and ideologies of his time. Bhagat Singh Birth Anniversary HD Images, Wallpapers, Pics & Quotes: Pay Tribute to the Freedom Fighter.

"They may kill me, but they cannot kill my ideas. they can crush my body, but they will not be able to crush my spirit" ~ Bhagat Singh

Remembering Shaheed Bhagat Singh ji, one of our country’s favourite sons on his birth anniversary. pic.twitter.com/XCF0GLNq98

“I have only one religion and that is to serve my country”. He was not just a man but an idea and an ideology. Bow down to my idol #BhagatSingh pic.twitter.com/CRLtU0c5FV

Remembering Shaheed Bhagat Singh ji on his birth anniversary. Your bravery, valour and courage will never be forgotten. We salute you. 🙏 pic.twitter.com/AUHDyWe2lS

Meanwhile, cricket stars are busy after a long time as the Dream11 Indian Premier League (IPL) 2020 is underway. Some staggering contest between the bat and ball was witnessed in the first week which has set the tone for the gala T20 extravaganza. Rajasthan Royals and Delhi Capitals have made the desired start to their campaign and will like to continue their winning run. While, the likes of Kings XI Punjab, Chennai Super Kings and Royal Challengers will be desperate to get the winning momentum. Nevertheless, these are still early days in the tournament, and the tide can turn very quickly.

(The above story first appeared on LatestLY on Sep 28, 2020 03:15 PM IST. For more news and updates on politics, world, sports, entertainment and lifestyle, log on to our website latestly.com).