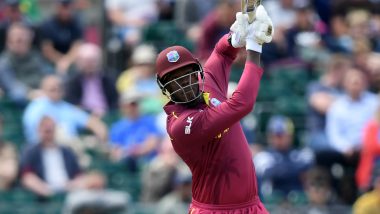 His reached the landmark with a pull to midwicket off Neesham's fourth ball in the 49th over. This was Brathwaite's first century in ODI cricket and it also helped him register a new high-score. His previous high-score was 50 which was also his only half-century in ODI cricket.  New Zealand vs West Indies Highlights And Cricket Score 29th ODI Match.

Coming into bat with West Indies four down for just 142 runs, Brathwaite took control of things and stitched some valuable partnerships with the West Indies lower order. The last three wickets yielded a partnership of 47, 33 and 41 runs respectively as West Indies fought valiantly to take the game as close as possible. Brathwaite was the mainstay in all these three partnerships, anchoring the Caribbean innings to take closer to victory.

Brathwaite took 25 runs from Matt Henry's 48th over, taking West Indies only eight runs away from victory. But Jimmy Neesham gave away just two runs in the next over which also included the wicket of Brathwaite in his final delivery of the over. Brathwaite honked a short ball towards long on which looked certain to go for a six before Trent Boult pulled off a spectacular catch on the boundary ropes to bring his innings to an end and hand New Zealand a victory.

New Zealand lead the points standings with 11 points from six games. They have won five consecutive matches - which they played - in the competition, while another game against India was abandoned due to rain. In contrast, West Indies are languishing at the bottom of the table with just three points from six games. They are placed also placed in the seventh position.

(The above story first appeared on LatestLY on Jun 23, 2019 02:39 AM IST. For more news and updates on politics, world, sports, entertainment and lifestyle, log on to our website latestly.com).