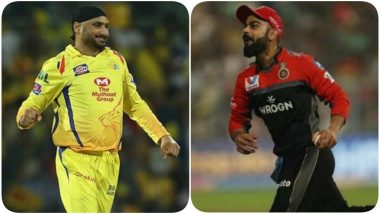 Harbhajan Singh is known for his epic replies and tweets which often get you tongue-tied. This time it was the Indian cricket team captain who was given hilarious response over one of his posts on social media and even Chennai Super Kings bandwagon. So here’s exactly what happened. The Royal Challengers Bangalore captain who endorses one of these popular footwear brands took to social media shared a snap of himself tagging the brand. Now, little did Kohli know that his post would be bombed by Bhajji and Chennai Super Kings. Rohit Sharma Posts a Picture Donning Mumbai Indians’ Jersey Ahead of IPL 2020 (See Pic).

In the picture, Virat held the yellow pair of shoes and also donned the same colour t-shirt.  Since yellow is the official colour of the Chennai Super Kings, Bhaji said that it was suitable for his franchise. Chennai Super Kings also had a hilarious response. Check out the tweet below:

The players will soon be gearing up for the upcoming season of the Indian Premier League 13 as the IPL Chairman Brijesh Patel has announced the dates for the starting of the tournament. He also confirmed that 51-day long tournament will happen in UAE with a fewer number of cases due to coronavirus. The teams have been unofficially asked to leave for UAE by August 20, 2020. The updates about the schedule will be announced soon.

(The above story first appeared on LatestLY on Jul 25, 2020 05:28 PM IST. For more news and updates on politics, world, sports, entertainment and lifestyle, log on to our website latestly.com).